Ever been to Birmingham? I have an idea it’s the UK’s second largest city, and until last week it was my second choice for the location of a nuclear waste reprocessing plant made out of lego (first choice being Borth, the grimmest town on Earth, located on the west coast of Wales. It looks like this when it is at its most exciting).

It would seem that Birmingham is not actually as depressing as one is led to believe by the bus station (it was whilst on a coach there that a fellow passenger decided to start vomiting into a carrier bag. “Perfectly natural reaction” I thought at the time).

But that was then.

Now, I know different, for I have met The Bull. 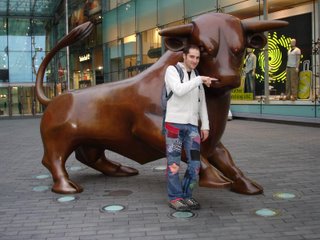 Not only that, I have now had the pleasure of getting up close and personal with a fabulous piece of architecture that I have long desired to stroke, the outer wall of Selfridges. Check out this mirrored wonder. 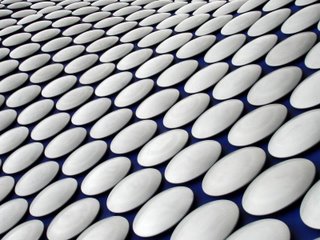 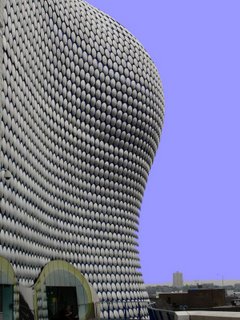 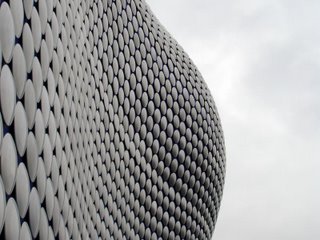 In fact, *twinkle* and I enjoyed Birmingham SO MUCH that we missed the last direct train back to Hereford, and ended up having to travel via Timbuctoo West in order to reach home that night.

So there you go, that’s my fabulous in-depth review of Birmingham. Well, Birmingham city centre anyhow. I don’t know about the suberbs, although they do look pretty grim from the train. Nice canal though, oh, and Cadbury’s Bournville factory of course, could go for a swim there and get some really sexy oompa lumpa to lick the chocolate out your earholes etc. If that sort of thing turns you on I mean. Can’t say I’ve done it myself, although that’s mainly due to the lack of Oomp Lumpa’s in these parts.

hmm, must be bedtime. I’ll leave you with a picture of a water lily in our garden pond. Should cleanse you of all those dirty thoughts.