My final exam, Contemporary Japanese Society went well. I broke my previous record (set only one week prieviously) for the most A4 pages filled with drivvle in a 3-hour exam: 20. My three chosen topics were the unecessary and unjustifiable bombings of Hiroshima and Nagasaki (first strike of the Cold War, rather than final strike of the 2nd World War). Second was the consequences of Japan’s rapid economic growth in the 1960s and 70s (pollution, death-by-overwork etc), and third was, er, oh yes, What impact does the existence of minority groups have upon the notion of Japanese homogeneity? Oooh I got so worked up in the exam I could have strangled the entire Japanese cabinet.

Results are out in about three weeks.

As soon as the exam was over it was off up to the road to the Japan soc BBQ (Photos here). That was really nice, seeing everyone one last time. Not just everyone from our year and the year below, but a lot of the exchange students too. It was so satisfying in a way, as last September, at the beginning of the academic year I set myself a few goals.

The first was to end my three years of relative lack-of-girlfriendness, and meet someone who was (a) wonderful (b) sexy (c) intelligent (d) kind (e) liked cooking, washing up and ironing (f) half-Japanese, i.e. Japanese, but with a Western outlook upon such things as self-fulfillment and individuality etc (g) had an ‘alternative’ education. (h) was a nymphomaniac There were a few other provisos too, but for security reasons they can’t be disclosed here. It is extraordinary that the girl whom I met in the first couple of weeks is all those things and more.

My second goal was to help create a much stronger community within SEAS, involving Japan Soc. I felt very happy to have been a part of the process that saw barriers broken down that I had felt were detrimental to my student experience in my first year. Last Friday’s BBQ was confirmation for me that that had been achieved. 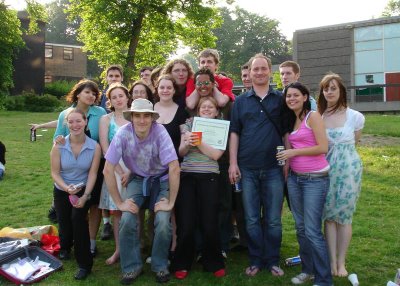 The class of ’94 at the BBQ – next time we see one another will be in Japan!

A third goal was to do well academically. As I said above, results aren’t out yet, but I feel quite happy with how I did, and I’m hoping to end up with a high 2:1; I doubt I’ll get a First.

A fourth goal was to be one of the 50% of our year that will receive a scholarship worth thousands of pounds for our year abroad next year. I am happy to say that I have achieved that goal, or at least I think so. I’ve received a congratulatory email from my Sheffield-based year-abroad co-ordinator, and I’ve received some kind of notice from Rikkyo saying congratulations, you have been nominated for a scholarship, ‘but the official announcement is yet to be made’. If I really have got the scholarship it really is fantastic news, as the initial one-off payment of 150,000 yen is more than enough to pay for my beautiful Sony A100 Digital SLR!! Tee hee, I’m so naughty! Mind you, if I don’t work hard this summer it will have to go on much more boring things, like rent.

Another task I set myself was to get to know everyone on my course. In our first year, we were divided into three groups and so didn’t really form a strong “Class of 94 group id”. That changed this year, and I’m happy to say I feel very comfortable with (almost!) everyone – what a lovely bunch of folks. I’m so grateful that we all get on, having heard some real horror stories from other years.

So yes, all in all, a mightily sucessful 2nd year at Uni. Thanks to all of you who made it possible 🙂