It’s wonderful to do some hard physical work again. I like that feeling, at the end of a long hot day on the Welsh Garden Project site, of being completely physically knackered. Covered in dirt, feeling the after-effects of close encounters with stinging nettles [click here for video of stinging nettle eating competition] and climbing roses that you forgot were hanging down from the trees under which you were cutting the grass and pulling bracken. So much more tired than feeling mentally exhausted from a day of Kanji Revision. Unfortunately though, I can’t escape that one either. “Tsukawanai to, wasurechau” as they say – “If you don’t use ’em, you’ll lose ’em”. How true.

Listened to a BBC documentary series called ‘Alchohol’ this morning whilst pulling brambles from below the Eucalyptus tree. It really is appalling how much damage the stuff does. Not just physically, but socially too. Even worse than the binge-drinking culture that has emerged in the UK in recent years (unseen anywhere else in the world), is the way in which developing countries such as India and Kenya are being exploited by the drinks industry. In Africa, it is often poverty that leads people to drink. In India, the rise of an affluent middle-class (beneficiaries of the IT / callcentre boom) means that more people have money to spend – a fact that the drinks companies are only too aware of, and only too eager to exploit. The big shots are buying up hundreds of local breweries, and investing heavily in advertising campaigns in a bid to make mass-consumption a part of daily life, in places where until now culture and religion have shielded populations from addiction. The issue is of such magnitude that, according to some estimates, alcohol-related illnesses (whether they be physical or social) will come to replace HIV AIDS as the world’s No.1 health problem.

It’s bad enough here in England. Government statistics show that there is a clear link between the increase in alcohol consumption and the increase in violent crime that we’ve seen in recent years.

Moving on… I knew I shouldn’t have mentioned hard drives packing up the other day. Tempted fate didn’t I? Yesterday, my 300GB External drive crashed, “…corrupted and unreadable”. All my music and videos that I’ve aquired / shot since last September, gone. Or so I thought. Thankfully, after hours spent hunched over the keyboard, I managed to fix it (was surprisingly easy actually. Shame it took me about 5 hours to figure out how to do it). I’m now backing it all up onto 25 DVDs. 2 hard drives in one week… fingers crossed a third doesn’t pop.

I’m feeling a bit worried about the amount of ‘stuff’ I have to do this summer. It’s the kanji that are really stressing me out. I also have to build a new website for a venture that *Twinkle* and I are launching later in the year. Time time time… It’s only about 10 weeks till I leave for Japan, not that long at all. It’s going to be very odd going back this time. In addition to the fact that I know far more about the place and language than I did last time I was there (thus fundamentally altering my relationship with the country), there’s going to be the whole ‘settling down’ type thing, which I didn’t have last summer as that was but a holiday. As of September, Japan will essentially become my main base, puntuated only by 10 months ‘away’ in 2007/2008 for my final year at Sheffield. Kind of exciting, kind of scary.

I don’t see myself living in Japan forever though, unless it undergoes some massive changes, both social and environmental. Place is too trashed. Institutionalised racism lives on, far closer to the surface than here in the UK, frequently rearing its ugly head, and that’s something I don’t think I’m prepared to live with long-term, and is not something I want my children to become victims of. The looming population crisis may force fundamental change, but even if it does, the process will of course take time.

Still, as I’ve said before, as a theme park, it’s a great country. As a homeland, it’s kinda screwed.

My rather groovy nephews, and their mum, who also happens to be my sister. Grandpa also features in the first shot, fishing for newts in the High Security (childproof) Rose Cottage Pond. 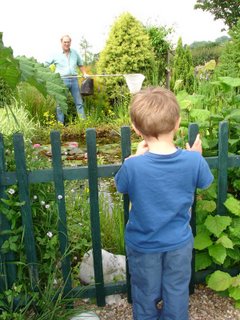 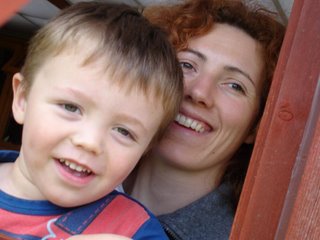 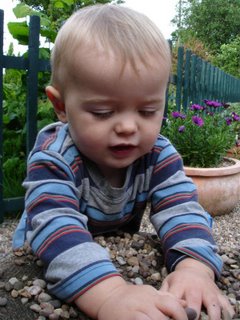