It’s been 6 days now since John John started out on his next intergalatic adventure, no doubt camera in hand. Since I heard the news that he had left us on planet Earth for places where one can travel without having to buy his favourite kind of ticket (that being the round-the-world airline type), I’ve found extracts from times spent together popping into my consciousness. The time he made two huge trifles which were put in the boot of our hire-car and driven down to the south coast of Japan along some very windy roads, the puddings slurping over the edges of their bowls; numerous trips to the ‘healthy eating restaurant’ in that basement in Kichijoji, or Muji where he’d always buy me an ice-cream; driving a van full of hundreds of pounds worth of huge bamboo plants across the UK, and unloading them into his living room which became an instant jungle. They were much too valuable to put in the garden in pots, and so had to stay indoors until planted! Our trip to Disneyland, the theme park upon which the rest of Japan is modelled… that was a funny day.

Watching the Sydney Olympics Opening Ceremony video became a given part of a trip round to his Kichijoji apartment. He loved it …I can hear his voice now as he imitates the Australian commentator – he knew the script by heart!

As I said before, John John has played a really important part in helping me to build up a relationship with Japan. He was an astute observer of Japanese society; much of what I heard from my lecturers at university I had first heard from JJ. He also enabled me to first see that it was possible to domesticate Tokyo, so that it wasn’t a huge, cold sprawling metropolis to be overwhelmed by, but rather, a place that I could call home. It was through observing his relationship with the place that within days of my arrival back in 2000 I was able to make the city my own.

What has struck me over the past week is just how many people John John has reached over the years. The variety and dispersion of friends and aquaintances is extraordainary. That will, no doubt, be demonstrated even more clearly on Monday when his physical self is laid to rest after a lifetime of dutiful service keeping up with an irrepressable spirit, in a beautiful bamboo coffin.

Much of my time this week has been spent, unsurprisingly, in the garden. We’ve had some beautiful weather, and I’ve been able to get quite a bit done. Yesterday a member of the local wildlife trust came to visit and offer advice on how we can best manage the 4.5 acres in order to promote it as a wildlife habitat. She clearly enjoyed her two-hour tour of the garden, and was particularly delighted to find that we have more of one particularly rare (endangered) flower than can be found across the whole of South Wales!

I’ve also had another toy to play with – an Allen Sythe. Whilst not terribly impressive to look at, it’s performance in the field is not to be scoffed at. I managed to cut the whole meadow in under an hour with this thing. We were a bit concerned about the toads and the slow worms being harmed by the onslaught, but thankfully there was only one fatally – the dog’s rubber duck lost its head!

Speaking of fatalities, there was another this week that was very sad. One of the two kittens was hit by a car just up the road, having gone on the hunt for a Tom cat. Thankfully it was a swift death (according to the local who came to tell us). We buried her that evening in the little cat cemetry up the hill.

My aunt and uncle came to visit the Welsh Garden Project with ma and pa a couple of days back. Lovely to see them. It’s been yonks since I stopped off at theirs on my way to Japan. What lovely people they are too. 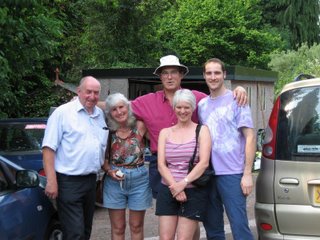 Kanji: The Heisig method is truly remarkable, and I wish I’d done the course two years ago. I’m just approaching the end of week three now, and have learnt the meaning and writing of 698 kanji, many of which I have not studied before. 50 per day every weekday. The real test is of course whether or not I can remember them after some time delay – and I can, without mistakes in the vast majority of cases. I would never have believed that it really is possible to learn 250 kanji per week… but it is. I spend about 4 hours a day studying – half of that time is spent learning new ones with the book, a paper and pen, whilst the other two hours is spent reviewing the kanji using the excellent review software and a tablet pc thing.

I recieved a nice surprise this morning in the form of 500 pounds from my local education authority. It’s a grant (i.e. doesn’t have to be paid back), to help me buy a new computer prepare for Japan. It’s great timing, as my Certificate of Eligibility (a document issued by my Japanese uni to enable me to apply for my student visa) arrives tomorrow via superfast registered mail. Thus, I will have all of the paperwork necessary to get my visa, and can set a date for departure, and therefore, buy my ticket. Money always comes in handy for that sort of thing.

It’s been almost three weeks now since I saw *twinkle*, and I’m missing her 🙁 We’ll see each other on Monday at John John’s farewell, but then going our seperate ways again. I think I’ll be heading up to Sheffield in a couple of weeks for graduation ceremonies. Hopefully not to retake my spring semester exams – results are published in 3 days (arghhh!)

I won’t be updating TDM now for a few days, as I will be in the internet wilderness until next Tuesday. This weekend sees my dear friend Catherine celebrate her birthday, so I’m off to yee oldy agricultural city of Hereford to partake in ‘stuff’

Hhmm, so life’s a real old mixed bag at the moment.

Take care out there