Caw blimey gov it’s so bloomin hot. I’m staying in *Twinkle’s* student flat, coincidentally the same place I lived in year before last. I’d forgotten just how hot the place gets. The window faces sort-of-south, and the curtains are lined with black felty stuff. Great for keeping the light out, but also great for absorbing heat. Last night was so impossibly hot that we had to get the ice-packs out of the freezer and use them as cold-water bottles.

Even having the window open post-sunset doesn’t help much. Although it does help one to overhear all the conversations that the prostitute outside has with clients. Last night business was brisk. Four indian lads in a car took it in turns, appearing and dissapearing in their white vauxhall every 30 minutes to pick one of their number up and drop another off for his bout. I’d get really pissed off with that nightly rountine if I lived here, although no-one can complain really as none of the houses in the area are owned by the occupants – it’s either student accomodation or council flats. What a life. It’s quite depressing really.

As you probably gathered from previous posts, *Twinkle* and I made it out into the Peak District a couple of days ago, the national park situated just to the west of Sheffield. It really was lovely.

Having taken the train to Hope, we set out on foot for the nearby village of Castleton. It was a really nice route, except for one anomaly – a huge great Blue Circle cement works rising from the meadows. Bizarre. A local later told me that it was accepted by local planners due to the employment it would bring to the region, although since its arrival it has brought nothing but lots of big lorrries, and a boom in sales of Photoshop as people seek to remove the renegade from their otherwise beautiful shots of the English countryside.

Castleton, surprisingly enough, was host to a castle, where *Twinkle* strapped me to the roof of the keep and whipped me with birch bark, just for the fun of it. 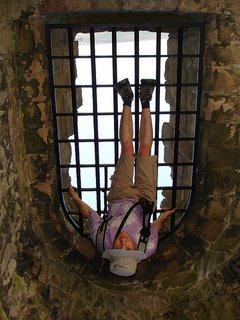 That done, we sat upon ye fair olde meadow in front of said keep, and gazed across to the ridge that ran the length of the other side of the valley, planning our route to the next pub. Now planning routes, as we all know, requires the use of a map. However, me being Clever Joseph and all that, I’d left my explorer map of the realm in Herefordshire. What to do…? I mean, it just wouldn’t have been a proper hiking trip without a map to see exactly where we took the wrong path 3 fields back – and so the day before our trip I decided to fork out another 15 quid (yes, 15 QUID!) on another map, identical to the one I’d left at home and never used. But clever Joseph was not to be outdone by his rather bad logistical skills, oh no. Having used the bloomin expensive laminated beauty for the day, I then took it back to the book shop where I’d bought it 48 hours previously and told them I’d purchased it by accident. I got a full refund. Now THAT’S the way to do it.

After a pub lunch we scaled the heights of the ridge on the opposite side, a ridge that provided us with a pretty impressive view across the park. Oh, and of the cement works. Following a bit of shadow puppetry on the triangualtion point thingy, it was then roley poley down the other side, towards the railway station. Having left our timing to the wind, we were delighted to find ourselves halfway down the hill when our train went by, like a little Hornby Locomotive, but slower.

Caw blimey gov, it was bloomin boiling that afternoon. We drank litres and litres of water and juice, yet not a single pee passed from our bladders.

All in all, a jolly nice day, and by the looks of things one of the last ‘days out’ we’ll have in the UK. *Twinkle* has a lot to do for her dissertation, and I am also very busy with my kanji and all.

Having actually paid for my flight it’s all starting to look a bit real. agggh so much to do in so little time.

Anyway, I shall stop my ramble here. Must return the DVD we watched last night – The Island – starring Ewen McGregor and Sexy babe whose name I forget. Loved the story.