Yesterday saw John John’s body laid to rest in a woven bamboo coffin, in a quiet meadow in the Buckinghamshire countryside.

The funeral was a simple affair, arranged by the Quakers, good friends of John John who have been wonderful in providing immense support for both him and all of us who knew him in his final weeks in this gravity-ruled world. I’ve not been to a funeral before, and always imagined them to be dark affairs full of mist, grey tombstones and cold earth. John John’s, however, was not like that. Being a green burial site we were not surrounded by harsh slabs of granite, but rather, long grasses and trees.

Saying goodbye for now to dear John was, for me, peaceful, calming, but intensely sad. He has given so much to so many – a fact that was made plain through the countless stories retold in the service later on, of how he had entered people’s lives, and changed them forever.

He certainly changed mine, and will never be forgotten. 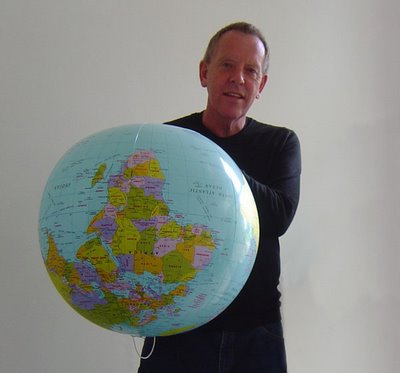 John John always saw the world somewhat differently to others!

“John embraced whimsy though he would not admit to eccentricity. On a whim he bought, for a few pounds, a blacksmith’s shop in Devon 30 years ago – it was used only as one more prop in his story telling. He bought a Showman’s Trailer, had friends working on it for hours, spent money on delicate cut glass, left it. Thirty years ago he sat in his Tokyo apato and talked of buying a house in Milton Keynes, again on a whim.

And it was to Milton Keynes he finally returned: he’d visited the Quakers all over the world. He loved their silence. And they have shown him so much love here, in his final days.

“Life” said John “Is a terminal disease.” Visiting John-John towards the end of his life it seemed as if he was looking on the whole process as part of yet another tale to tell. Somewhere he or his spirit lives on, spinning a cobweb of stories, having another piece of bread and butter pudding. And laughing at life’s – and death’s – whimsical ways.

Three days before he died, his lungs failing fast, John-John still found the energy to beguile a mesmerised visitor with a lengthy description of the intricacies of the Japanese toilet system. This was vintage John – his interest in obscure things, his enthusiasm for entertaining or shocking people and above all, his love of telling a story.

John Yoxall was born during the war – a time, he said, of glumness and quirky Englishness: thick elastic bands on red OXO tins, Jowett Javelin motor cars, Bakelite wirelesses and damask table cloths and pieces of Madeira cake in the front room on Sunday afternoons. As with so many of John-John’s tales, it was never clear how much was real and how much was the product of an imagination forever in overdrive. “Imagination is more important than knowledge” said Einstein. “Imagination encircles the world.”

John-John circled the world like another planet. Movement was constant. “I only travel for the insecurity” he’d say, walking out the door with his black bag. He worked with lepers in India – or maybe it was in Africa – in a hospital in Darwin, as a chapel warden in New Zealand. He lived in Japan for nearly 40 years yet for all that time he was on short term visas. He spoke very few words of Japanese yet, with that instinct and empathy he had, probably knew and understood Japan and its people as well as anyone.

We – family and friends – are all part of the story: like a zealous stamp collector, John-John gathered everyone up and stuck us in the album of his phenomenal memory. He would arrive from somewhere out there in what he called the global village and, before drawing breath, the stories would begin- of the Sikh paraplegic trapeze artist, of the Australian truck driver craving a sex change, of the Japanese potter escaping his mistress’s husband and running naked up the village street, of his times with Angela Carter – who said John did not realise just how original he was. The tales had no obvious beginnings and certainly no endings – deeply confusing and beguiling at the same time. It was like turning on Radio 4 on a slow afternoon, letting it all wash over you.

Detail was of the essence- the pattern of the kitchen tiles, the crockery on the mantle piece. “You know” he’d say, rolling his eyes and about to guffaw – “She was the sort of person who would have a lilac coloured bathroom suite and drive a Mini Metro very slowly…” Shortly before he died the cook at the nursing home came inquiring about the food he wanted: “I do like your socks” he said. “And I wish I had those clown’s trousers.”

He’d talk of the English disease and going on walkabout. He wanted to drive – to pick up hitchhikers and regale them with more tales: given John’s very dodgy driving skills, it’s not surprising there are so few hitchhikers about these days. He’d follow you down the garden: In return he’d expect hospitality – a constant supply of biscuits (chocolate digestives preferably) and pots of tea, trifle and bread and butter pudding. Various object d’art would be deposited – a stone rabbit, a phallic pepper pot, a precious chime. You’d be inveigled into various tasks. You’d never know when he’d come – or when he’d go.

Some of us, immersed in what he’d call our humdrum lives, would grow tired – unable to give John the attention he warranted. We’d also wonder about his life – John was an artist when it came to never answering a question. We all loved him in our way: perhaps very few of us actually knew him.”

John John, on his amazing folding bicyle with automatic gearbox, cycling away down a tree-lined avenue in Milton Keynes