Upon arrival in Japan these days, you may well be the recipient of a litle slip of paper stating, in several asian and south-american languages, “If you are a victim of human traficking please show this piece of paper to any Japanese person”. Then, in Japanese, it reads,

“HELP! I am a victim of Human Trafficking! Please take me to the nearest Police Station!”

It seems that in Ledbury, a wee little rural town one stop down the line from my home town of Hereford, well-known for strawberry production, the immigration authorities are not so proactive in stopping this dreadful trade.

Thus, an enterprising worker, probably one of the 3,000 who have arrived in the area from eastern Europe in the last couple of years, has resorted to taking extreme action to bring attention to his plight, at the mercy of an evil employer who only pays him 1 pound an hour and keeps him locked in the chicken shed at night. 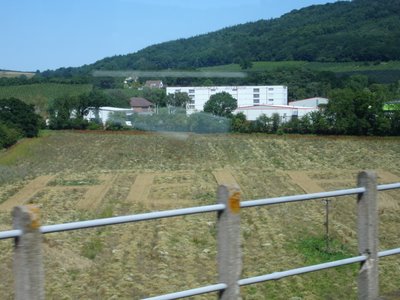 He has, as you can see, planted the crops so that they have grown to spell out in huge wheaty letters, H E L P !

Shame I was on the train, otherwise I would have gone to investigate further.