phew. the migration is complete.

I’m told that the average length of time spent setting up a new computer is 5 days. based on past experience, I’d say that’s about right. Thus, I’m mightily happy to say that this switch, from my old Toshiba to this shiney new MacBook, is done, only 60 hours after I took delivery of it. Not bad eh, considering how thick i am.

I tell you what though, I am NEVER going back to Windows. I’d been starting to get the feeling that my old computer wasn’t actually mine, that it was just leased from Microsoft, what with their genuine advantage crap and all. Hundreds of processes going on in the background, endless security alerts about this that or the other. All history now. I like the simplicity of it all. For example, if you want to uninstall a program on Windows, you have to faff about with Add or Remove programs. Takes forever to delete all those files, leaves empty folders lying around the place, and a right mess in the basement. With a Mac, it’s simply a case of dragging the program icon out of the Applications folder and into the rubbish bin. Done. Originally, I was intending to install Windows on it too, but just don’t see the point now.

And all those clever things it does… and it’s so shiney…!

The move has not been without problems. I’ve lost all the postal addresses and phone numbers from my address book. Not too fussed there as I only ever really use email these days. I have lost 25% of my music; before the migration I backed it all up onto 18 DVDs. Turns out all 18 DVDs were faulty, thus rendering vast swathes of them unreadable. The rather bizarre thing is that it seems to have chosen every single 4 star and 5 star rated track. Luckily I have another backup copy back a few hundred miles south of here, so shall be retreiving the music at the weekend. Emails: can’t import my emails from Outlook into Mac Mail without a lot of hassle. I intend to use the imap method (courtesy of my university email account) but need a windows system to upload from first. That’ll have to wait till Japan.

Apart from that, it’s all good. Oh, and the Podcast software – fantastic! Can’t wait to try and do something with it rather than just look at it!

So, I’m feeling kinda jetlagged. Only had 5 hours sleep these past two nights, thanks to wanting to get the migration over and done with so I can learn my last 200 kanji! I must be careful, if I have a epileptic wooptommony this week I’ll be in big poo. Smelly poo at that. Speaking of which, Shit! Does it really say 9 days to go up there? I think I’m all sorted now. I’ve ordered my Japanese yen, sent a big wadge of cash from my UK bank to my Japanese bank account – I just hope it’s still open as I’ve not used it for years! Accomodation is STILL not confirmed. Ce la vie. Have just spent the last 2 days, inbetween looking for the non-existant delete and hash keys on my keyboard, proofreading Twinkle’s 14,000 word (40 page) dissertation. For the second time this week. It’s great, but I can honestly say I won’t be that sorry if I never read it again!!

We’re really moving into the floaty world that is Between World’s now. Always happens, when it’s about a week before some significant departure. My heart starts to make its was over ahead of me (flight was fully booked you see), leaving me utterly ungrounded.

If you’ll permit me to use the word “Shit” for the second time in this post I’s just like to say SHIT! I’m really going back to Japan! What is it about Tokyo that I love so much? The smell of rain on tarmac, the looks of disinterest on people’s faces as someone falls off a motorbike, the packed trains full of professors with cameras or mirrors attached to their toes…

I love the little backstreets. Not dirty, just untidy, with their telegraph poles and aircon units everywhere, flowerpots mingled with bottles of water that allegedly stop the cats pissing on your beautiful concrete wall. I’ll have to get a bike pretty soon. In theory, I could cycle to uni from home, but I get the impression that I wo’t want to give up so much time for that excercise. I once did the 9-minute subway route from my home to my office in Nishi-Shinjuku, by bike, and wondered how the hell the road managed to be so long. Took me over an hour!

The closer I get to going back, the more I’m taken back to March 2003, when I came back to the UK after almost 2 years in Japan. I remember thinking how alien thewhole place seemed, and worrying that I would never fit in. I had felt so at home in Japan.

The housing, that’s another thing. It may be cramped by Western standards (although not by Western Student standards if my university accomodation is anything to go by!), but I love it. I like that fake wooden flooring, I love tatami, and the cold – there is something about houses with absolutely no insulation (i.e. 90% of those found in Japan) which just gets me going. I remember waking up and the room being so cold there was no way I could get out of bed and make it to the heater switch on the opposite wall without my feet freezing to the floor first. I love the fruit and veg shops, the stationary stores, the jingles played at the railway stations (each station, and in some cases each platform, having its own unique song).

And of course, I love being a gaijin. But how thick will the walls of my bubble be this time? The language barrier will be considerably less, but I’ll still be a gaijin, and there will be no getting away from that. But oh! What a joy to be a gaijin! All that discrimination! Both good and bad, it’s makes for a very exciting time! Watermelons given to me in supermarkets, estate agents refusing to do business with me, strangers asking me how long I have been in Japan (think of that bundle of stereotypical waffle which makes me long to return to Shinjuku, Lost in Translation, when he’s in the hospital).

Ahh it’s gonna be exciting, that’s for sure. Can’t wait to see me mates too. Mr.Tkob, Stu san, to name but two.

Well, I’m bushwhacked. I have a huge pile of logs to split tomorrow, so I’d better go and sleep. 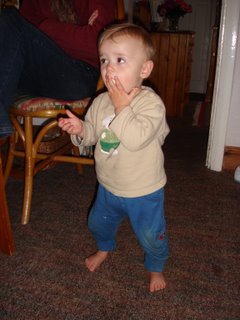 My nephew Edward, who has just this week started to stand up!