Jon and I were also “fortunate” enough yesterday to find ourselves walking into a national Cosplay Convention. Ok, so I’ve seen plenty of elegant gothic lolitas on the streets (they are starting to rival salary men in terms of numbers), but I have never before seen so many people attempting to escape reality by pretending to be fictional characters from various comics and so on.

I was very impressed, and also somewhat worried. The amount of effort these people had gone to was astonishing – some didn’t look at all like dressed-up humans, they really looked like lifesize 3D cartoon anime characters.

Unfortunately I have very few photos, and none of the more impressive outfits – this is due to my being told by an attendant that photos weren’t allowed – despite the fact that virtually everyone around me was clutching a camera! 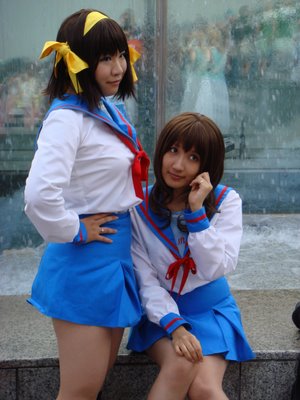 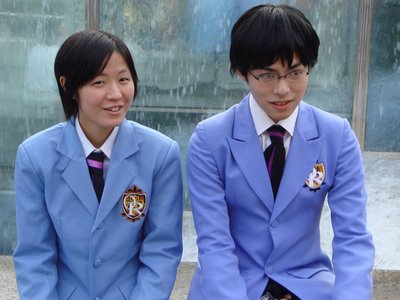 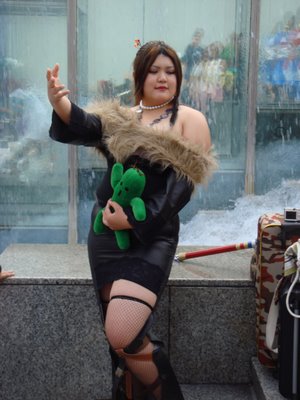 One could say that this paints a worrying picture of Japanese society, when people go to such lengths to escape reality. But then I think of our trip to York last year when it was crawling with vikings; they were actually living the dream by having real battles, whereas these cosplay characters were not attempting to jump off tall buildings and fight each other with Golden Power Balls, or whatever they use. Then there’s George Bush. Talk about living in a fantasy world.

We also shared an elevator with a very famous person yesterday, although we have no idea who it was. We were on our way up to the 43rd floor in the exclusive Tokyo Hotel by the Big Egg, and noticed that the two older ladies in front of us were in a bit of state, acting all child-like around the other occupant in the lift – a very smartly dressed man in his 50s.

Upon arriving at his floor, the ladies tried to utter some compliments, but seemed almost speechless. The doors of the lift closed behind him, at which point they almost collapsed on the floor, absolutely starstruck.

The amusements were not over yet however, as a few floors further up a couple of businessmen and their wives got in. Now this elevator was situted on the edge of the building, and one wall of it was made of thick glass. There was another sheet of glass about 20cm the other side of that forming the outer wall. One of the businessmen thought he’d take a look down at the miniture landscape below us, and not noticing the inner-glass wall, walloped his head hard.

Somewhat startled at what had just occured in front of us, Jon and I asked the man if he was ok. He gave an embarrased smile, and then had to explain to the other occupants of the lift what had just happened. We all thn started to laugh, and didn’t stop till we reached the top floor.

…where we discovered that in order to gain entry into the Sky View Restaurant we’d have to fork out 10,000 yen (45 pounds) on a meal! Back down in the lift it was then.

And back through the revolving exit door. A revolving door that incidentally wasn’t powered by a motor, but rather, by a white-gloved man in his early 70s. Yes, his job was to stand at the entrance to the hotel all day and pull the revolving door round!

I also had my first taste of baseball yesterday, in a netted court that has a row of machines at one end that hurl the balls at you at over 100kmph. Ouch.

It’s a good job I’m running out of money.