I bought a mobile phone yesterday.

Naturally, it came with a free Dog Cleaner. 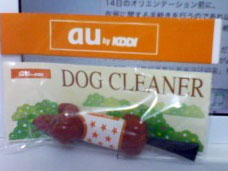 Now all I need is a dog.

Upon unpacking my collection of goodies from the 100yen shop this afternoon, I discovered that the bin I had purchased was no ordainary bin.

No, it is in fact a WITTY TRASH CAN, no less than an Eco Green Dustbox, which I am told is “bound to make your room the most wouderful”

I’ve always wanted a wouderful room, and I can see the transformation taking place already!

This could be connected with what *Twinkle* was told by a store owner when we went into a bakery this morning.

“You look so happy… Something wonderful is going to happen to you today”.

Not exactly what one is expecting to hear when handing over 200 yen for an almond slice, but then life is full of surprises.

Such as the one involving the 5 cocktails I drank last night, having already consumed 3 large beers. It turns out they did actually contain alcohol, despite my insistence at the time that as they were on the nomihodai menu (drink-as-much-as-you-like) they wouldn’t really contain anything but juice.

It was a really fun evening. In the end 17 (former and current) students from Sheffield turned up, mostly Japanese, including some very familiar faces that I hadn’t seen for about 18 months. First stop was a cosy little izakaya …ah! Japanese food! Just the best! Why do we Brits put up with such rubbish?! It seems I am destined to be a carnivore this year, having already consumed chicken, pork and beef this week.It has felt a little odd to be eating dead animals, I can feel my stomach grumbling “What the hell is this?” for about an hour after I eat it, before figuring out what combination of acids it can use to break it down into goodness and poo poo.

Following that it was into the lift and up to the 7th floor for Karaoke, only to fidn ourselves turning around in order to go find a cheaper place – they wanted over £10 per person per hour!!

Back on the street we were accosted by a young chap with the typical copper-coloured hair that is a must if one wants to work in the seedier areas of town. Ooooh, such a rebel! Anyhow, he had a great karaoke deal going – just less than £4 per person per hour, including nomihodai! Crikey, two drinks and you’ve recouped the cost already! So, we start to follow him back to the place he represents – only to find that it’s the same place we’ve just left in digust at the prices! Lesson: there’s no fixed price for karaoke, always haggle.

Wow, my singing just got better and better as the evening wore on!

It’s only today that I realise how drunk I must have been. It has, at times, been quite difficult to remain standing. The trip to the estate agent to sort out our new flat (which we hope to move into at the beginning of next month) was quite painful. A whole hour of trying to look respectable and not fall off my chair.

The release of the first episode of my podcast is having to be delayed, due to the loss of my camera en-route to Japan. This was my primary recording device (the sound quality was simply excellent), and without it I’m a bit stuck. I note that my phone can do everything including the washing up (and is, according to its website, ‘Music Hungry!’), but this being Japan and it being a Sony it isn’t Mac compatable, thus no way to transfer stuff to the Podcast. I’ll get a new camera sometime in the next week; still waiting on my money to arrive from the uk.

Tell you what though, I feel as if I’m an old fogey when it comes to using my mobile. takes me absolutely ages to write a text message, and I literally have to stop whatever I’m doing, sit down and concentrate hard! It’s pretty amazing what it’s capable of though: as well as being a phone and Walkman, it’s also a GPS navigator (shows you maps of where you are / where you’re going), you can use it as a ticket to get on a train just by holding it over the reader on the ticket barrier, likewise you can buy stuff with it in loads of shops that have the phone-reader thing. Built-in QR ‘barcode’ reader for quick navigation to websites, videos, vibrations etc. And what did it cost? 5 pence (plus a 12-month contract!). Buying it was quite an amusing process, and I wouldn’t be surprised if that poor girl at the shop spends the rest of her working life going to great lengths to avoid having to serve gaijin!

I do feel somewhat displaced at the moment. I think things will be better when we move house. The new place is exactly that, having only been built 3 months ago. All the furniture is included, as is the 100mbps fibre optic internet connection (priorities!). It’s a lot closer to my university than the place I’m in at the moment, and there’s probably less chance of the bathroom being ‘befouled’ and not cleaned up.

Uni will of course bring welcome routine too. That kicks off next Thursday.

Anyway, I must make a few phone calls in a final bid to locate my camera. Then there’s the minor issue of revision…

“I know that kanji, I know I know it, isn’t it a St.Bernard dog being suspended from the ceiling with a snowboard strapped to each ear?”