It’s no good, I just can’t get to sleep, no matter what I try. Must be those two cups of coffee I hd 6 hours ago.

It’s been quite a productive day today. Being Thursday, I had no classes, and so decided to make the most of my time off by …doing my homework! Had I stayed at home I probably wouldn’t have got much done. Probably would have played around with my Mac in a vain attempt to retreive the 200GB of data that I seem to have lost thanks to a faulty hard drive. I’ll see if Windows can do anything with it once *Twinkle* and I are settled in our new place. 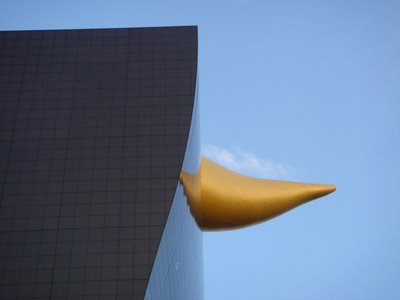 The tail of the Golden Sperm, Asakusa

I can’t tell you how much I am looking forward to moving. For a start, it will mark the end of sleeples nights – we all know what the best remedy for insomnia is. It will also mark the end of time-consuming conversations via text and messenger, which I must admit I absolutely loathe, no matter who they are with. It’s ok if it’s video or voice, but if it requires key pushing it drives me up the wall, especially when I’m feeling so stressed.

So yes, I decided to go out for the day. My study venue? The beautiful 144 acre Shinjuku Gyoen. Who would have thought that such an oasis could exist just a couple of minutes from the world’s busiest railway station, and major shopping / entertainment district? I know the park fairly well, having often visited during my previous life. Despite this, I still find myself surprised and delighted by what it has to offer.

I was fortunate enough to find one of the four tables in the pavillion thing free, and so soon got down to work, practicing my posh Japanese for when I meet the Emperor. I sat there for about 4 hours, taking breaks from the class handouts by watching the world go by. The little child running around shouting “Hato Sama! Hato Sama! (“Mr. Pigeon! Mr. Pigeon!”). Why the daft thing didn’t fly away I don’t know. Later on, the scene before me turned into a TV set, as some celebrity or other appeared, followed by a couple of cameramen, and surrounded by production staff. There was an interview in front of the pond …then they moved on, to be replaced by a huge group of scarily fit pensioners who started doing all sorts of excercises in front of me.

There were other people too, who just sat.

Incidentally, I had to leave my bow and arrow at the entrance gate, as it stated quite clearly that in addition to ‘stealing plants’ and ‘playing ball games’, “hunting animals” was prohibited.

After the park closed at 4.30pm, I made my way back to Ogikubo. Unable to face the idea of spending the whole evening in The Cell, I opted for that bastion of Japanese restaurant culture, Dennys, which offers unlimited refills of tea and coffee for only 320 yen (£1.50).

It was ok for the first couple of hours. I got quite a bit of work done. And then they arrived.

I don’t think I’ve ever witnessed anything quite like it. These two men, both in their early 40s, spent an entire HOUR quoting train timetables! I kid you not. One of them used his mobile phone to connect to some internet-type service, which seemed to be reading off up-to-the-minute train times. He would then repeat these very loudly to his mate across the table, who would burst out laughing every few seconds. The coversation went something like this:

(is interrupted by man 2)

It was one of those situations when I really wished I couldn’t understand Japanese. Surely such an ‘amazing’, ‘exotic’ and ‘unique’ country such as Japan couldn’t play host to such people..?

Unfortunately though, it could, and it does, a fact drummed home for a further 50 minutes.

“Ah, they had a lot more freight trains passing through Shinjuku 15 years ago, you remember..?

My sanity was restored somewhat on my walk home. Last night, having been deprived of all my music by the afore mentioned hardware failure, I thought I’d plug a pair of headphones into my mobile phone. Blow me down if it didn’t turn into a radio! Anyhow, imagine my delight when tonight I switched it on and was greeted by the oh so familiar sound of Giles Peterson! Whoda’ thought it, one of my all-time favourite DJs , there on my phone. He must have overheard the conversation I’d endured in Dennys, and knew I needed therapy.

I’ll leave you this morning with a photo of my uni, here in Tokyo.