It was a desperate sitution. I’d been trying for 5 hours to study, but just couldn’t bring myself to do it. Realising that things were getting out of hand, I made a decision: Get out of the house, go to that cheap ‘Italian’ restaurant that’s open till 2am, the one with the free drink’s bar, and study there. Packed my bag, opened the door, and then thought,

‘Hang on, this is ridiculous. We’ve just spent all this money on rent and so on, so we have our own place, and I still have to go out to cafe’s to study – even when Twinkle is at her parent’s house?!

Thus, I went to the supermarket around the corner instead, bought some half-price black-sesame flavour Haagen Dazs, a big tray of sushi, and a pack of Van Outen hot chocolate. Enough to keep anyone satisfied, surely? Back home, on with the iPod, study stuff spread out all over the kotatsu (heated table) and new white carpet thing, bought today for only 3400 yen.

It worked. I managed to get through one of the three handouts I need to do by Wednesday, and thus feel much better. Learnt some new grammar in the process – a bonus!

So, yes, it’s been a pretty mad week, what with the move and all. I didn’t intend to miss my Wednesday class, but by the time I’d finally finished stuffing the last of belongings into Twinkle’s suitcase and my big rucksack, it was getting on… I wouldn’t make it on time, and thus cancelled the class. Still, because of this the following day I was able to begin the cultivation of a beautiful relationship between myself and my favourite sensei. I’d been softening them up already by correcting the (English) grammatical errors on the class handouts… ooh I know, terrible aren’t I?! Still, close relationships with one’s teachers makes for a much more enjoyable education in my experience, a subject I touched upon in my previous post.

The move then – it went well. Apart from that bit when I put my 45kg suitcase, which contained amongst other things, an HP printer, a few plates and a lightbulb, in the back of Twinkles father’s car. Before I had a chance to shut the boot he was forced to move the car due to the presence of an oncoming bus that seemed to have no intention of stopping – when he pulled off the suitcase remained exactly where it was, resulting in it not actually then being in the car, but rather lying on about 80cm of air. CRASH!! I thought I contained my horror remarkably well.

Speaking of horror, last night I saw my first ever proper fight in public (in Japan). It was not nice. Two lads, who had obviously had quite a bit to drink, were not too happy with one another. A punch-up ensued, with one chap having his head repeatedly slammed into a ticket machine, and then kicked once he was on the ground. Naturally, o-one did a thing, as is the way. I couldn’t bear to watch, so ran off to find the police. All knowledge of correct grammar usage left my head as I tried to explain what was going on. Still, they got the message, but by the time we returned to the scene the victor had fled the scene, the other chap lay semi-conscious on the floor being tended by station staff who had been somewhat alarmed by the sound of someone hitting one of their machines rather harder than is usual when it doesn’t give you your change.

‘Semai’ is how I would describe our new home. Semai, in this case, being an adjective that could be applied to a shoebox that belongs to an ant who has just got a lovely set of slippers from Clarks that are the perfect fit. I must admit, I was somewhat horrified when I first saw what we had signed up for. 4 days down the line, I quite like it, although I do wish that we could see sunlight. Although the neighbouring building is a whopping 15 metres or so away, it’s so big that it blocks out the sun as it traverses the southern skies.

(apolgies for erratic behaviour of photos in this post) The backside of our manshon
Entering the flat, we have a corridor – home to the washing machine, ‘kitchen’ which basically consists of a sink, and a cooker where the draining board should be, as pictured below. 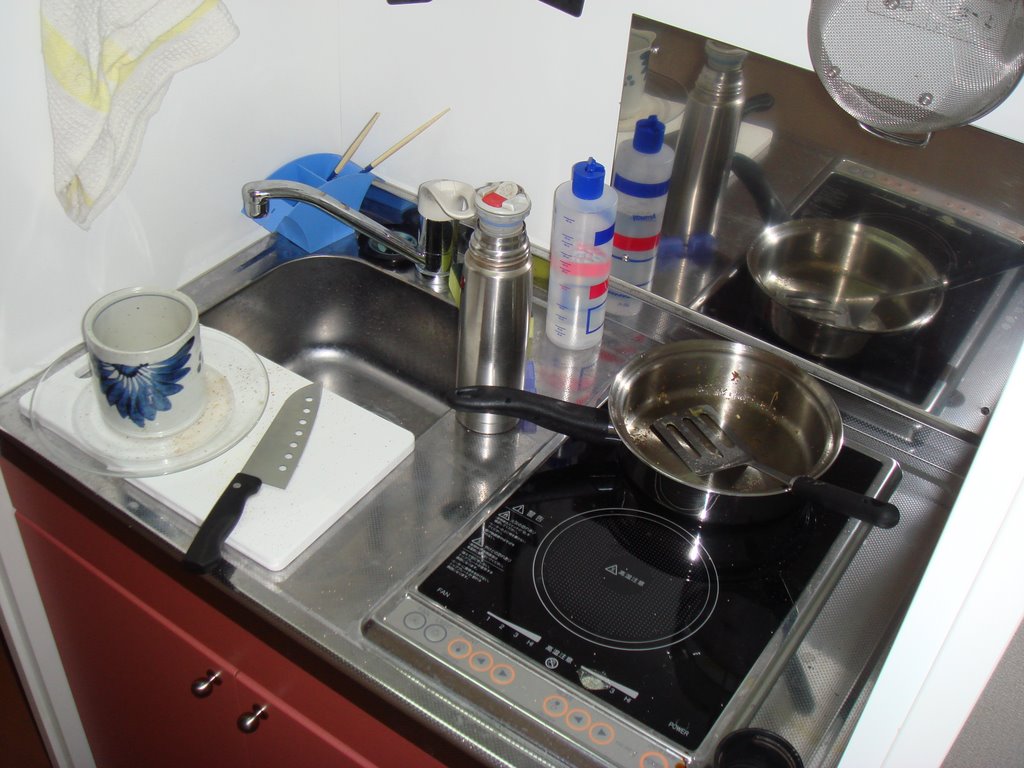 In the corner of the corridoor is a microwave, on top of a fridge. No work surfaces…

Toilet and bathroom are the usual modern Japanese affair (although no remote controlled bum massager – I demand a refund!), a single unit manufactured by Bridgestone tyres of all people.

The living room is 6 tatami mats in size, which is, er, exactly 3.7m by 2.5 metres (I knew that IKEA tape measure would come in handy). Here it is, as seen from the bedroom, which is a little attic up a 7-rung ladder. At least we have a balcony, which we can fill with plants, when we’ve raised a few thousand pounds to buy them that is. It seems like you have to pay per-leaf for house plants round here.

We’re in a nice area though. I like the shoutengai a lot (traditional shopping street, packed full of privately owned tea-shops, fruit and veg-sellers and the like). Got a huge basket of bananas for 40 yen the other day! Plus, we have quite a few 100 yen shops, some of which are open 24 hours. Oh, I did make one rather shocking discovery in one of our local supermarkets:

The broadband comes complete with a few TV channels, including MTV. Which reminds me, I recieved an email yesterday telling me that that ghastly program made by the BBC, and featuring the epic 2000-2003 tale of Yours Truly, has now been broadcast in New Zealand. Let’s just hope it never makes it to Japan… For some odd reason we also have a seperate digital TV box which offers all the usual rubbish (quiz shows featuring ‘celebrities’ who spend up to an hour debating something such as the correct way to fold a towel). Mind you, we’d better not take it with us when we move house because there’s a ban on carrying out apparently…

So far the only TV I’ve watched has been Air Force One (Harrison Ford), which thanks to the wonderous innovation that is biluingual broadcasting gave me a whole evening of nail-biting tension, and ‘The White House’ (is that what it’s called? American drama series…) I spent a whole afternoon watching that (in English of course), and loved it!

*Twinkle’s* sister had a baby the morning of our move, and thus she (*Twinkle*) been pretty taken up with proceedings around that wonderful event. I finally went to see the baby today – she’s so cute, and has the most impressive head of hair I have ever seen on one so young. It was really nice to go visit *Twinkle’s* family. I hadn’t yet met her mum or grandma, so was a tadge nervous on the way there. However, it turned out to be a very relaxed affair, was all very natural. I didn’t feel I had to ‘try’ and be anyone but myself. The fact that I’ve been to the family home several times now helps of course, and I feel very relaxed around *Twinkle’s* 3 sisters (2 of them having been educated in the UK) in any case. Her father has started to relax around me now too, so it’s all cool there. I finally remembered to thank him for lending me a significant wadge of money to tide me over until my scholarship arrives!

My new acceptance of polite-Japanese has led to my feeling much better about myself when with people who are using it with me!! Ah, it was fear you see, this belief that I couldn’t do it, that I couldn’t remember to add my ‘masu”s and my ‘desu”s! The fear of mistakes led me to discard the entire concept. Well, I now realise that this was folly. Since my decision to cast aside my rather negative attitude towards keigo (see previous entry), I have found new pleasures hidden in the simplest of conversations with polite people! Yes, Joseph is no longer a rude bastard when it comes to speaking with upper class snobs Japanese people whom I don’t know too well.

It was quite amusing today though, when *Twinkle* repeatedly chastised her mother for using overly-polite Japanese with me. Reminded me of when *Twinkle* came to stay at my parent’s place last new year, except there it wasn’t mum’s use of overly polite English that caused raised eyebrows, but rather her shouting across the diner table “DO YOU KNOW WHAT A LEEK IS?!!” Of course we laugh about it now; mum soon learnt her lesson.

Yesterday saw a gathering of dear John John’s friends, here in Tokyo. Not many of his close friends in Japan were able to make it to the funeral in England in the summer, so it was was only right that some kind of celebration of his life took place over here. 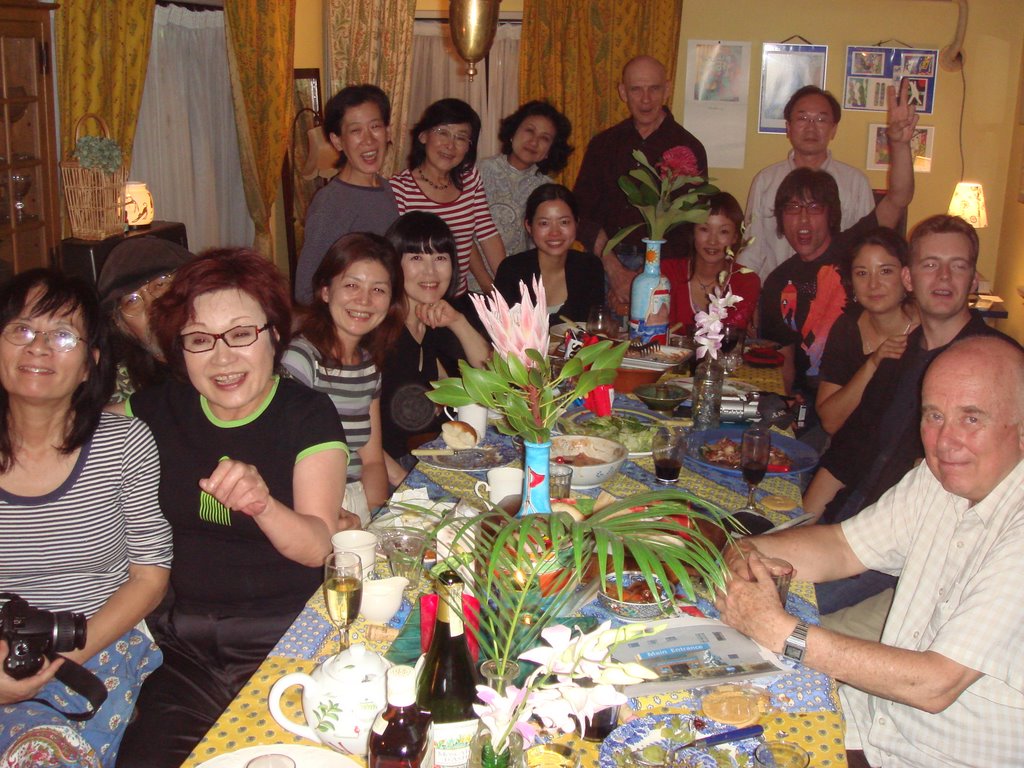 It was nice to see people there whom I have not seen for many years, indeed, since one of my first trips to these islands. It was also good that *Twinkle* had a chance to meet two of my bestest friends here in Tokyo, T&M, whom I wish I saw more of. I’m so glad E&R came up from the coast to join us too… Entertainment was provided by a Mr. Cox, who was very well oiled by about 3pm, and continued to lubricate his innards with red wine until about 10pm. …as did everyone else for that matter. I was conserative in my consumption, not wanting to be a complete wreck when meeting mother.

Ted and David, ‘The Old Farts’

M and her Pussy Cat 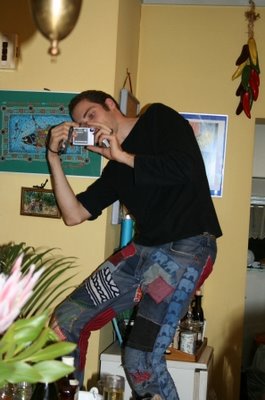 Hhmm, so yes, busy busy days. If I carry on like this the year will be gone in a flash. Not a moment to spare it seems.

Today (that is, as of one hour ago), is our anniversary. That is, it’s exactly one year ago that *Twinkle* first seduced me the little minx. Unfortunatelym despite our anniversary landing on a national holiday, I have uni, as for some reason they’ve decided that Rikkyo will have Tuesday off instead of Monday. Still, we’re planning to go somewhere Tuesday, which should be nice.

Feelings towards Japan remain mixed, on a bit of an emotional knife edge at the moment anyhow.