Hey ho tiddly pom! This Mumble comes to you live from a train that is slowly descending from the heights of Koyasan, an amazing World Heritage site that lies deep in the heart of the Japanese outback, about two hours south of Osaka. Wow, what a beautiful place, and almost free of tourists too, it being a weekday and all.

We arrived in Osaka at 7am after almost 9 hours on a bus (a journey that only takes 2.5 hours on the Shinkansen [Bullet Train]); thankfully it was a very comfy bus, complete with big red and green buttons by every seat that operated the hydraulic foot rests – they were so groovy. The sexiest thing about this bus though, in a completely non-environmentally friendly kind of way, was the fact that it had TWO engines. One to make the thing move forwards and backwards, and another which I eventually decided supplied all the seats with compressed air. I spent ages trying to figure out exactly what sequence of events preceded its rumph into action. It was quite a thrill when, at 2am, it suddenly struck me. I don’t think those around me appreciated my cry of “Eureka!”

Incidentally, did you know that in Japan they even have traffic jams on motorways at 3.30am?

Anyhow, so, arrived in Osaka, and decided to see the sights of Namba, just for old times sake. It struck me how much plastic there was around, in the form of rather bizarre bits of shop-front signage and so forth. 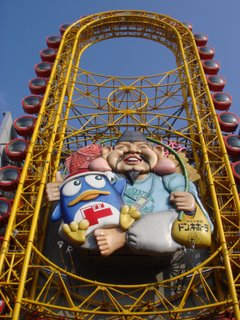 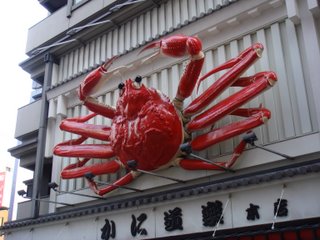 I was also rather surprised by the big gangs of lads patrolling the streets near America Mura holding placards which read “Kyachi se-rusu boushi” – which literally translates as “Stop catch-sales”. If you go to somewhere like Kabukicho, Tokyo, you see this method of doing business all the time. Essentially, it involves young Japanese men, usually with long, light-brown hair, and wearing black suits, literally grabbing women by the arm and saying, “hey, hey, you got a second?” They then go on to ask the victim how old they are, or if they’re a student etc, before trying to sell them something like make-up, or trying to get them involved in a porno which will then be broadcast on the love-hotel TV networks, which unfortunately wasn’t one of the channels included in our package…

I have quite fond feelings for that part of Osaka. It was there that I spent my first ever night on ‘mainland Japan’ (Honshu). I lived in a capsule hotel for a fortnight, the one that came complete with used condoms under the mattress, and read ‘Memoirs of a Geisha’. I didn’t know it was fiction, and was utterly spellbound by the story. All around was exotic and unusual. I’d stay out all night, sleep for a couple of hours in the morning, and then head off to somewhere like Kyoto or Kobe, still very drunk. It was in Kobe that I then met the monkey-loving Gerilynn, stereotypical young blonde American girl with whom I had a lot of fun going places; she remains a good friend to this day despite the years that separate us from our last meeting.

Having admired the Christmas decorations, full size space rocket (a bit of a change on Mitsubishi’s part from their usual car and refrigeration production lines), had rather too much fun with Purikura (Print club – they’re basically photo booths that you find in amusement arcades, with which you can make some real groovy pictures, which are then printed out for in sticker form to plaster all over your mobile phone and text books, as demonstrated below),

…and enjoyed a really good 100% organic late breakfast at a wee little recycled café just outside the West Exit, we decided to head out to the afore-mentioned World Heritage site. The train journey, which would take almost 2 hours, was going to be a bit pricey at 1200 yen (£6), but thankfully there’s plenty of ticket shops in Osaka, much like those in London’s Leicester Square, except at these places you can buy almost any ticket under the sun, excluding those that will take you to the moon. We were fortunate in that at the particular place that we went to they had a whole stack of Norihodai (‘ride as much as you want’) tickets for the train company we’d be travelling with; they’d been sold them by a train-company shareholder. Thus, 2 hours later, we arrived at Koyasan, having paid only half the usual price.

I must admit, Koyasan really did not disappoint. The build-up had been quite something; following the lengthy train ride (during which we were surrounded by about 30 French folks, all speaking French, oddly enough), we boarded a funicular which took us up the steepest mountain to have ever have been created by nature / God (delete as appropriate). I couldn’t help but think ‘but what if the cable snaps? Those buffers at the bottom certainly won’t cushion the blow, what with them being lacking in any form of sexy hydraulic ram action. And as for the brakes – there was only one per car! 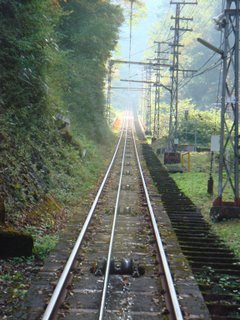 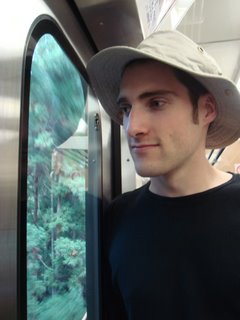 As you’ve probably guessed, the nightmare scenario didn’t unfold, and we arrived safely at the top, ready to embark upon a bus journey that took us even deeper into the mountains, via the twistiest turniest road I’ve ever seen. It was SO windy that it almost went backwards!

Arriving at our final destination, I was impressed before we’d even had a chance to disembark. Ye ancienty Japanese houses lined the small street, masterless Samurai cut down any peasant that carelessly forgot to move out of their way, and the phone lines were all buried underground (in Japan, that’s always a tell-tale sign that you are in some ‘special’ place.

When Twinkle mentioned that the first sight on our tour of the area was a cemetery, I must admit I wasn’t all that enthralled. Stones with people’s names on are all very well and good if one is researching one’s family history, but for a fun day out…?

Boy was I wrong! I tell you, if you ever feel the need to have your soul enshrined somewhere, Koyasan is the place to come. It really is beautiful; I was utterly mesmerised. The cemetery, which was first used over 1000 years ago at the time that a religious sect set up their headquarters in the area, covers many square kilometres of mountain side. It is populated by huge Japanese Cedars, many of which are over 100 years old, and famed throughout Japan for their longevity (thus the roadside stalls selling saplings in their hundreds). Between these majestic monsters stand hundreds of tombstones, many of which mark the resting places of important figures in Japanese history, such as the Shoguns (feudal lords) Oda Nobunaga (1534 – 1582) and Takeda Shingen (1521 – 1573), the latter having fought the former and lost, thus his enshrinement in 1573. 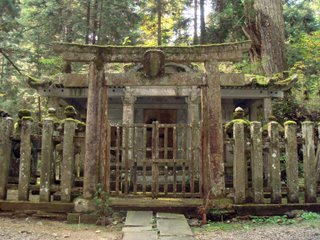 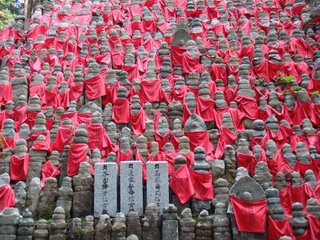 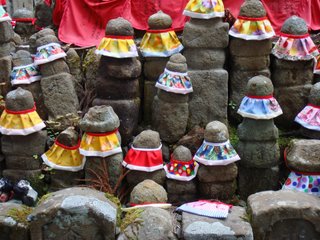 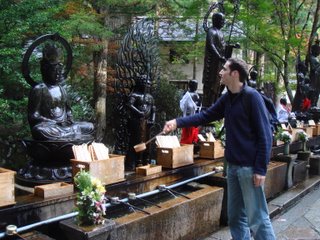 Throwing water over the bronze Buddah

Koyasan is not just home to the souls of individuals however. One can also find a myriad of company tombs. Panasonic, Nissan Motors, and a non-descript aeroplane manufacturer are just three of the hundreds of organisations that maintain graves dedicated to the souls of any employees that have died in the line of duty. We also spotted one that had been erected by the ‘Osaka Rojin Kurabu’ – literally translated, the ‘Osaka Elderly Club’. One can just see it on the leaflets advertising their activities to potential members, “Our gravestones got your name on it!” 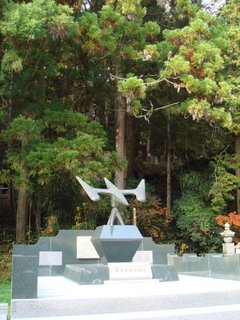 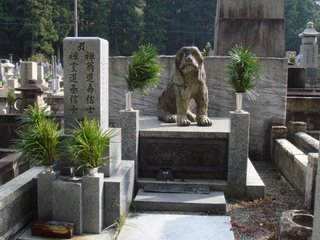 Dedicated to a much-loved dog 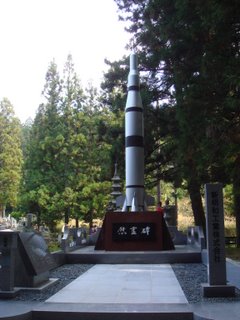 Possibly the most bizarre gravestone I have ever seen!

There was one company grave in particular that caught my eye. 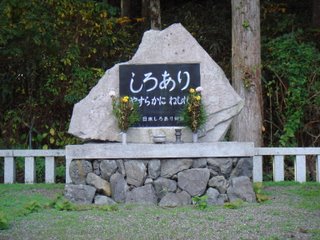 Yes, that’s right, it reads ‘Shiro ari’, or, in English, ‘Termite’. I was somewhat confused by this, until I read the explanatory note that had been added by the Buddhist sect that oversees the cemetery. “This stone was erected by Yamada and Co., a company that specialises in termite extermination. This memorial, noteable for its size and prominent position within the cemetery, is here to quell the spirits of those termites it kills in the line of duty, in order to maintain harmony with nature.”

We continued to walk through the woods for a good hour or so, until at last we emerged into the quiet village. Feeling pretty hungry, we ducked into a lovely little café and gallery, which displayed many pieces of pottery produced by one of Japan’s most famous potters, who happened to live next door. The café was owned and run by a really nice couple; she was French, he Japanese (he spoke what seemed to me to be fluent French). The food was absolutely delicious, and as we ate, we started to chat about their daughter, who was manically running around the place generally being very funny. Talk turned to education, and it turned out that they really wanted to send their daughter to Kinokuni, the alternative (Summerhill style) school that Twinkle attended some 8 or 9 years ago. We then got on to the subject of Steiner education. I became very animated – all in all it was a delightful lunch.

Walking on down the road, we came to what must surely be the biggest pagoda in Japan. It was stunning. At 48 metres in height, it towered above us, shining in its orange glory. It really was one of those “I can’t believe this is real” moments. Surrounding the pagoda were numerous other Buddhist buildings, from which emerged chanting, and incense. They also sported Off Shoes signs, as pictured below. 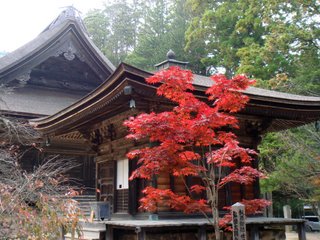 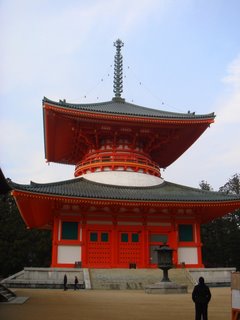 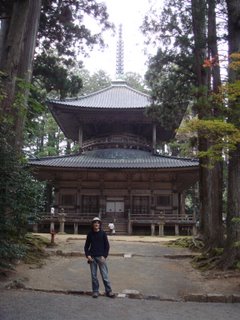 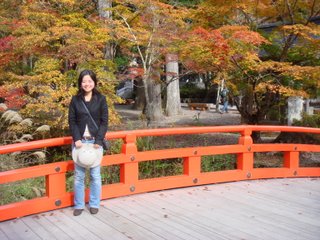 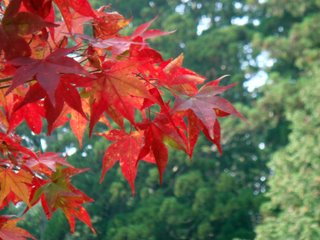 Well, the train is now approaching our station. Tonight we’ll be staying in Twinkle’s mum’s apartment, ready for a day at the afore-mentioned Kinokuni school, tomorrow. It’ll be nice to spend some more time with Mother, get to know her better, and hopefully start to feel completely relaxed around her and able to be myself (i.e. idiotic).

All in all, it’s been a great first day of our holiday. I’ve been doing some more reading, and thinking too, and feel very very positive about my studies and all that. Life’s great. I must stop complaining, as I really have nothing to complain about.