What a fantastic day it’s been. Joseph is a very happy boy.

It all started at 8am, when I was woken by Twinkle treading on my foot. Her mum’s apartment is Japanese you see, i.e., small, thus the three of us were squeezed into the single bedroom, with my feet by the cupboard with all the clothes in.

A quick breakfast, and then we were off, off on a voyage into what really can be called “countryside”, even by Western standards. In the past, when Japanese people have said to me, “yeah, my parent’s home is in the middle of the countryside, there’s nothing around for miles”, I’ve initially believed them, and then when finally visiting said family home, find it surrounded by houses, garages, convenience stores and vending machines. The thing that makes it “countryside” apparently is the fact that between every other building is a little field of cabbages dating back to the pre-war era. The tax on agricultural land is far lower than that on land occupied by an erection, thus many families have found it more feasible to simply keep on with the fruit and veg. Anyhow, off we went, heading towards the mini-mountains that surrounded the town on three sides… and then up, and up, and up. 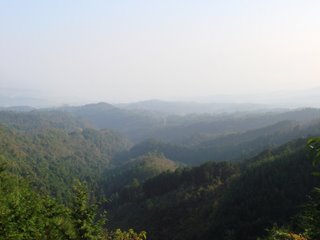 This really was ‘countryside’. The well-surfaced main road became a dodgy half-tarmac half-concrete switchback track, penetrating deep into the wooded slopes. No vending machines up here. So it was, that after about half an hour, we arrived at Kinokuni, a boarding school modelled on A.S. Neill’s Summerhill in southern England. 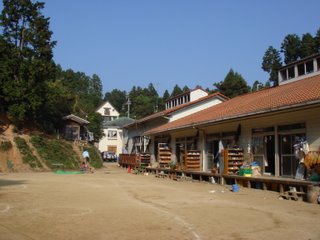 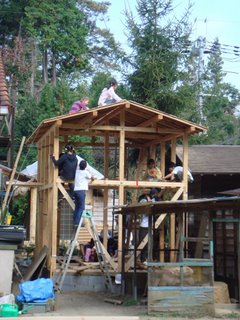 making recorders from plumber’s piping, cooking up some apple pies, finalising plans for a trip to Okinawa, building a mini-shrine (very impressive), 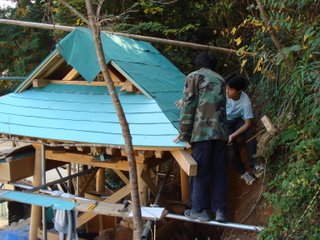 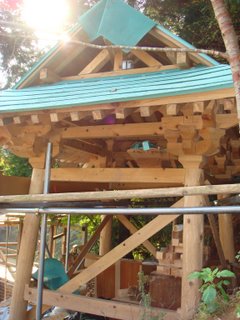 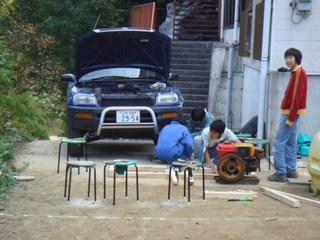 …and typing up reports on their recent month-long trip to another Summerhill-type sister school in Scotland. They hold a weekly meeting in which they all decide how the school will be run …and generally create the feeling of one big family. The fact that well over half of the 200+ students live on-site adds to this communal feeling. It reminded me of the Steiner school in many ways.

After lunch with the children, we descended the mountain and began our journey here, a traditional Japanese ryokan (the nearest English equivilant is B&B, although that term just doesn’t do it justice) located in a village that’s even more remote than Kinokuni. This little mountain village, situated at just over 800 metres above sea level, is, like yesterday’s Koyasan, a Unesco World Heritage site.

200 or so households make up Dorogawa (‘Cave River’). The nearest railway station is over an hour away by car, which made for an interesting journey here. Thing was, when we got to the station, we discovered that the next bus for Dorogawa wasn’t due to depart for an hour-and-a-half. It wasn’t exactly warm, and I didn’t really fancy sitting by the bus stop until my nose fell off; thus, we decided to try and hitch hike. Having walked down the main road for a mile or so, we finally found a suitable hitching point on the road to Tenkawa (‘Heaven’s River’). It must have been only about ten minutes before someone pulled over, an old granny who’d just picked up her granddaughter from the school opposite us. We told her where we were going – an hour up into the mountains, to which she replied that she was only going 2km down the road, but hey, what the hell, jump in the back and I’ll take you up the mountain. 30 minutes later there we were in Tengawa, only fifteen minutes by car from our final destination (and incidentally, the place that has the priveledge of hosting the region’s only set of traffic lights). Had we had to wait long for a lift I’m sure I would no longer be able to have children; the altitude we were now at sported a fashionably low temperature – it was FREEZING! Thankfully though, within minutes we were picked up by Yamada san, a resident of this wee little mountain enclave, who knew our hosts well – thus we arrived at the ryokan 90 minutes early, and without having to pay the extortionate bus fare.

Masugen Ryokan is a family-run affair, and has been providing travellers with a place to rest and recuperate for some 300 years. I must admit, I was pretty blown away by it upon entering. 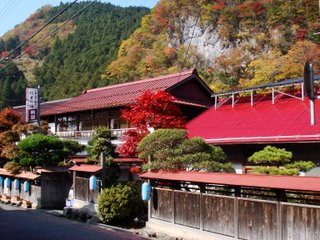 We were greeted by the entire family at the door, and then shown to our grand room on the 2nd floor. Well, our grand TWO rooms to be precise, each of which is bigger than our whole apartment in Tokyo. We also have a little balcony type thing, where we can sit and sip green tea, whilst admiring the maple leaves on the mountain slope opposite.

Having put our bags down, Twinkle pointed to the wall on the opposite side of the street; there was a sign there that might interest me.

Ha! There was my name for all to see – welcoming me to the village! (Ok, so they called me Joseph Tim instead of Joseph Tame, but that’s only because one character has been written slightly smaller than it should have been. Perhaps it was so they could fit all the characters in…) It turned out that ye ancienty building opposite was actually part of the ryokan, hosting more guest rooms and the onsen (natural hot springs). What started off good just got better when dinner was served – what a feast!

Post dinner it was time to warm up in the onsen. Off with the day clothes, on with the Yukata (light kimono) which surprisingly was almost long enough for me. On with our geta, and clip-clop-clippety clop across the road to soak. Being the only guests in the Ryokan, we decided that it would probably be ok for us to share a bath – as with most onsens these days, there are two sections divided by gender. There was the slight risk that the owner’s daughter would turn up, but what the hell… Hmm, that was a nice bath, another location to add to the list ☺

Despite the freezing temperatures, the futons look very snug. As is the custom, they were magically laid out for us when we were eating – we smiled when we saw that they had made a special effort to accommodate me, by laying out an additional futon (complete with sheets, blankets and cover) just for the benefit of my feet, which otherwise would have poked out of the end!

All in all, a fantastic day two of our Autumn holiday. This is what it’s all about!