How can one remain positive when the first thing you see in the morning, upon turning your mobile phone on, is this: 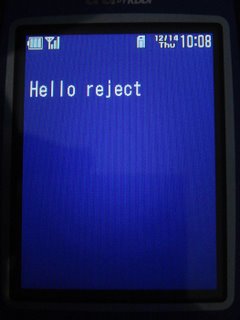 Another classic example of some Japanese-English translation gone slightly wrong! You would have thought that having been made by an international corporation (Sony) they would have thought to have asked someone in the London office to check over the English before releasing the phone…

Anyhow, until recently I had no idea why my phone would be so cruel as to call me a reject when I turned it on. I mean, it should be grateful, for having the pleasure of carrying my soothing tones through its circuitry and out onto the airwaves. Turns out that there’s a story behind these two words: Until not long ago, there was a scam whereby your phone would ring once, you’d answer it and say “Hello”, but the line would go dead on you. If you were an idiot, you’d then call that number back to see who it was, and get charged your life-savings-per-minute for the call.

Thus, this function was built into mobile phones such as mine, to reject these “hello” calls, hello reject. I’m intrigued to know how it actually prevents you from calling these scam companies back: does it have a powerful cattle prod subtly concealed within its casing to discourage you from selecting “call back”?
____

A few miles further away from home: that Google Earth thing has suddenly got a whole lot more clever! There I was, just looking for some shot of the roof of the Arts Tower, Sheffield, as you do, when I spotted a funny symbol located on the roundabout by the uni. Click on it and Hey Presto! Live webcam showing the morning rain! How exciting is that?! Other locations have photos taken by the likes of you and me, or guides to certain parks and so forth.

Live feed from Sheffield. Does not auto-refresh. Note building (currently under construction) to right of picture: that will be my home next year, it’s the new university library.

If you’re reading this whilst in Sheffield, why not go down to the roundabout now with your wireless laptop, and see yourself on one of the world’s most famous blogs?

I note that, according to Google Earth, our house has yet to be built. If one is to believe the satellite picture that covers our area, we live in a car-park, or more specifically, in the back of a white van. Thinking of the size of our apartment, that’s not a bad representation.
____

*Twinkle* starts work for one of Japan’s largest companies in a couple of weeks. It’s going to be hardcore, with long hours spent doing what is going to be an exhausting job. One of the main reasons she’s taken a post with this particular company is that in addition to offering a very good training program (vital for our future plans), they also have 3-year contracts available, thus providing a light at the end of the tunnel. The wages aren’t to be scoffed at either – I should bloomin’ well hope so too considering the demands that will be made of her. Whilst reluctant to enter the “job” market (why spend one’s life trading one’s time hour-by-hour, working to make money for someone else?), reality dictates that a) we need training and b) we need strong financial foundations for future business ventures.

[N.b. I appreciate that not everyone works for the sake of money (think Steiner school teachers!); I’m focusing here upon those who still believe in the myth of the rat race.]

I have another friend who has recently graduated and is soon to be entering a large Japanese corporation. When asked why they didn’t take a fixed-length contract, they replied that they didn’t know what they would be doing in 2 years, so it would be irresponsible to decide now. I see it as the other way around. I feel it’s irresponsible to NOT make a decision. By saying “oh, I’ll just wait and see what happens”, they are condemning themselves to a future dictated by others. Essentially, they are surrendering control of their lives to the whims of a multinational corporation that at the end of the day only cares about one thing: its own profits.

Having said that (he said as he donned his hypocrite hat), yesterday I was pretty shocked and sickened by the power of money over me. I received an email from a friend inviting me to apply for a job as a proof-reader for a Tokyo-based company. 35 hours a week-ish, with an annual salary of £26,000. The thought of earning that kind of money (I think the most I’ve ever been on is about £16,000) sent my brain into overdrive – how could I fit that in with my studies? Of course, after a few minutes I saw sense; but nonetheless, that initial attraction was pretty stunning. I mean, I currently live on less that 1/5th of that amount. Imagine how much I could invest for our babies’ future educations in the space of just a couple of years.

Anyhow, back to *Twinkle’s” job for a sec. With her welcome pack, she received a “Manner Basic Book”. Whilst of course I knew that Japanese companies did provide training on how to greet customers, I never quite realised how precise it could be…

How to lead a client down the corridor, and how to operate a lift.

How to serve tea.
Remember this is a marketing company we’re talking about here, not a cafe.

How to greet clients (stand thus, say “Irasshaimse”, bow, then back to upright position. Note how hands are held (right over left), including positioning of thumbs. This is important.)

Degrees of bowing. Depending on seniority of person you’re greeting, either go to 15, 30 or 45 degrees. I bet in the politician’s manual it goes all the way to 360 degrees…

Finally, how not to knock a granddad over on the street when on a bicycle. No, I don’t quite see the connection either. Maybe the manual is sponsored by Tokyo Metropolitan Police Department.

Well, it’ now getting on for midday, and I have a million and 3 things to do. Feeing terribly excited about today, as like everyday it is a blank canvas, awaiting my crayola-laden fingers to splash it with colour and energy. RAAAAAAA for life I say, what a wonderful gift it is.