Turned out to be a most rewarding party. About 30 people there, almost all of whom were Japanese. Ate, drank, played games (which would have been difficult even if I hadn’t been drunk and having to use japanese…), met some REALLY interesting people; not only the chap who’d just got back from Egypt, but also Sho, who lives a couple of stops down the line from me. Now there is someone who is an inspiration: I will do my best to meet him again. He also happens to be a singer, thus tonight’s Karaoke session was utterly fantabulous. 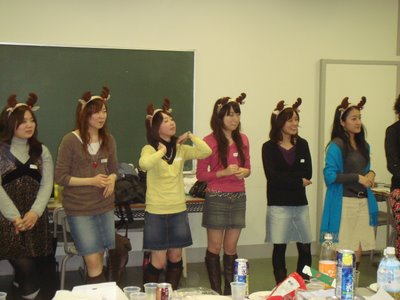 Once home, I read about heavy fog blanketing the UK, 40% of Heathrow flights being cancelled etc. Decide to phone *Twinkle* who’s due to return to Japan in a couple of days to warn her, and to remind her to buy me some deodorant. Can’t get it over here as Japanese people don’t sweat, due to being brought up on a rice diet. She’s shopping in York, and doesn’t seem to want to talk to me. Says it’s a bad signal. “Sou nan ya” (really…) think I in my unfortunate Kansai manner, but continue to love her ridiculous amounts and thank my lucky stars that we met when we did; perfect timing. Still can’t really get over the fact that I’ve met someone who is so completely lovely.

Needs work on her international-telephone-call-from-boyfriend manner though. I shall have to spank her when she gets back, after she’s spanked me.

My super party present went down very well, the recipient, who I didn’t know until tonight, was very grateful for the hours of work that went in to what was a unique gift. It drew quite a crowd. For reasons of national security I can’t reveal here what it was, but I was mighty pleased. Its so nice to do special things for people, especially when they’re strangers.