It may only be 7.30am, but we’ve already had quite an eventful day.

First, there was the 3.18am earthquake. Ok, so it was only a baby, 5.7 at the epicentre, 3 in Tokyo, but it was the first one we’ve had since September that’s been strong enough to rock the house. I say ‘only a baby’, but you must admit it’s a pretty strong baby, a baby on amphetamines perhaps, strong enough to shake absolutely everything in Western Japan at one time. I know I couldn’t do that.

Naturally, we got out of bed and switched the TV on to see where it was located and what strength it was. Had it been a biggy, we would have been concerned about relatives elsewhere, but as it was, it was ok. Back to sleep.

Perhaps it’s just the warm-up act. I’d rather be in Tokyo than the UK when the big one strikes. It would be incredibly challenging to have to deal with the worry and feeling of powerlessness associated with having friends and loved ones in the quake zone if one was the other side of the world, and phone lines were jammed etc. As I believe that our house is safe (it should be, being new …unless the quake-proof data was faked), and I spend the majority of my time at home, I’d rather be here. At least I’d be able to help in an emergency. And we have our special earthquake torch and emergency supply of food for when the supermarket shelves are cleared. A man trying to sell me a newspaper subscription gave me a toilet roll yesterday. It’s wrapped in pink plastic so I’m yet to see if there’s a different news story on each page.

The second somewhat alarming event this morning was *Twinkle* falling down the ladder that leads down from the loft, sending the rice cooker flying and banging her head upon landing. I don’t think I’ve ever got out of a nice warm futon and into a freezing cold room so fast, her cry as she fell was something I never want to hear again. Apart from the initial shock, she’s ok, the only mild injury being a bruised leg. Ironically, I was the one that burst into tears. It really brought it home to me…
____________

Moving back in time to yesterday evening, I played the classic part of the “Baka na gaijin” (stupid foreigner).

So, I went to the supermarket to buy some apple juice. I saw a carton which had been reduced as it was nearing its Best Before Date, so picked that up, paid for it, came home.

Once home, I opened the carton and, being thirsty, downed a fair bit.

UUUuuughhhhhh!!! It was disgusting!! It was slightly fizzy, and tasted of vinegar! It had clearly gone off. I felt the urgent desire to put my head down the loo.

“Excuse me, I bought this apple juice about half-an-hour ago, and it’s clearly gone off – it tastes of vinegar!

The staff member looked at the carton, looked at me, and then asked me to please wait a moment whilst he fetched the manager.

Off he runs, returning a few moments later with the manager in tow. I repeat my case to the manager, pointing out that they still have a load more on the shelf – they really shouldn’t be selling apple juice in such a condition!

The manager was very good about it. He understood that not all foreigners knew the Japanese kanji character for “Black vinegar”, as prominently printed on the front of the carton, above the picture of a couple of apples. He kindly pointed out that in fact all the drinks in that isle were ‘vinegar drinks’, which are thought, in Japan at least, to be good for the body. 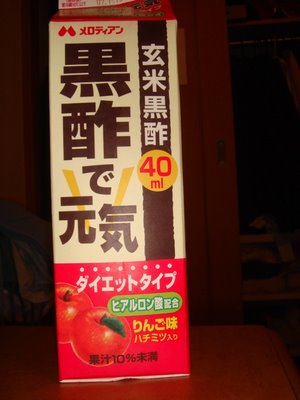 I suppose that would explain why the vinegared apple juice I bought tasted of vinegar.

I felt like a right fool. Naturally, I apologised sincrely, whilst bowing so that my nose touched the ground, in my best Japanese style.