We open today with my latest portrait piece – that of Dodge.

“Splatter & Dodge are the two bumbling sidekicks of Diesel 10. He collectively refers to them as “Splodge” claiming that saying both their names takes too long. Although the other engines do fear them, they do not have the intelligence or villainy to match Diesel 10. Splatter is purple and more talkative than Dodge. Dodge is olive and more intelligent than Splatter.” 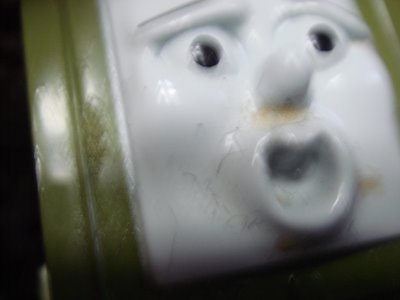 Rather bizarrely, looking at this photo has just prompted me to order this DVD from Amazon.co.uk… Has it had the same effect upon anyone else?

My quality of life rose dramatically at the weekend, with the acquisition of two new devices.

Amongst the possessions that dear John John left behind last year was a pair of speakers for his Mac. Unfortunately, following the clearing of his box, the transformer for these speakers went walkabouts, rendering them unusable. Sunday saw me paying a visit to the stunning (relatively new) Yodobashi Akiba, a dangerous place for gadget boys with money.

MUSIC! Boy have I missed it! Yes, my MacBook does have speakers, but they’re tiny, and wearing an iPod makes one terribly isolationist isn’t particularly sociable. Now, I have this lovely pair of pretty powerful speakers behind me, one to the left, one to the right. What a joy it is to be able to listen to all my music properly again. Also, when I send an email, there’s a whooshing noise, like some kind of aeroplane whizzing by – I never before appreciated that this actually flies across the room – I could send emails all day now, just to hear that stereo whoosh!

The other acquisition was considerably more expensive – we’re talking hundreds of pounds. It doesn’t have any buttons. It doesn’t have any remote control. It has no moving parts. It just sits there, with three lights on. Sometimes it beeps. Yet, this simple device has made more of a difference to my quality of life that any other gadget I have ever bought. Oh, with the exception of my darling mac of course.

What is it? It’s a water filter. Dirty water goes in, clean water comes out.

Before coming back to Tokyo I would have thought that anyone investing this kind of money in a water filter would have to be absolutely nuts, but now I’m of the opinion that not having one is just as silly, if one lives in a place with water like this.

Late last year a friend of ours came round to visit. He just so happened to have a couple of chlorine-testing tablets in his wallet, as you do. They’re pretty simple to use: you drop them in a glass of water, and the more chlorine there is in the water, the pinker it goes.

I must admit, I was absolutely horrified. The water from our tap that we used to wash vegees, to make rice and miso soup, to boil potatoes, to make tea with, went pinker than your little pinky on a very pink day. What this did was visibly demonstrate what I’d long suspected. On the day we moved in I’d noted that the water stank. Pour a glass of it, inhale (no, not the water! The air around it!), and you really could smell that chlorine. We weren’t alone in being unhappy about this. Over 50% of Tokyo Water customers don’t like the idea of drinking the stuff that comes out of the taps [link].

It’s crazy really. Chlorine is known to be very poisonous in large doses, yet it remains one of the most common chemicals used for water purification.

What this meant was that whenever we wanted to drink something other than tea (the chlorine smell and taste seemed to wane a bit post-boiling) we’d have to buy it. Thus, over the past 3 months we have spent a considerable amount of money on bottled water. The environmental cost of this has not been insignificant either: although we recycle the bottles, one has to consider the energy involved in making them in the first place, filling them with ‘mineral water’ (the quality and safety of which is not guaranteed), and finally transporting them to retailers. It just makes no sense, when we have the good fortune to have water piped to our home.

Thus the decision to buy our filter, which is now semi-permanently plumbed into the kitchen tap thing. It’s a very clever filter, even has an ultra-violet light in its middle to zap all those nasty bugs.

The next step is to get one for the bathroom. Once again, when I first heard about bathroom filters I thought it was a bit of a daft idea, but having moved to Tokyo and actually smelt and felt the chlorine, well, one feels the need for a shower after having a shower!

It has been shown that we take in 7-10 times more chlorine & other chemicals from showering than from drinking water. A recent study published in the American Journal Of Public Health documented the link between chlorine and breast, colon and bladder cancer and stated that “2/3s of the harmful exposure is from showering…”.

When chlorine vaporizes it combines with other airborne particles and forms chloroform gas, a known cause and contributor to asthma and other respiratory problems.

I don’t think I worry unnecessarily about my health – I generally try and maintain a positive attitude – but I really don’t like the idea of having all these chemicals around me. It’s important to look after yourself – it’s the first step towards helping others.

Now to provide others with clean water. We’re not talking filtered water here, we’re talking water pumps in refugee camps. Watch this space for a very exciting venture to be launched soon in partnership with the TGW network…