So, it’s a Sunday morning here in fair Tokyo Town, and the sun is a shining. I do like Japanese winters, at least those of the Kanto area (the plain on which the capital sits). Unlike back home, there’s little in the way of storms or heavy rain. Clear skies are common, but despite this it’s not as cold as one might expect. Must be the tarmac, or perhaps all that body heat – 300 people per square metre must have some warming effect.

Perhaps the reason why we have so many sunny days is because we need to put our futons out to air everyday. I must admit, I used to think the putting the futons out to air thing was something that neurotic housewives did, being obsessed with ‘freshness’ to the extent that they had to change their socks every hour. I suppose this is partly because I have never found my futons to need airing. They’ve always seemes to be perfectly ok just being folded up in the morning and shoved in the cupboard.

Photo interlude: unfortunately we have a Bring Restriction on our local train

4 months in Viva! Kami Itabashi as our cupboard is comically called, have taught me otherwise. It was early January when I first started to notice the spots on the bottom of the futon. The thing is, in the loft we have no tatami, nor do we have any base to raise the futon off the solid plasticky type floor that also serves as the ceiling of our kitchen. Thus, body heat and moisture had no way to disperse, and thus the futon started to steam.

I now hang the futon out on our 1st floor (that’s ‘ground floor’ in UK speak) balcony every other day, weather permitting, and hope that no-one steals it.

Which reminds me of those guys who go around stealing underwear from people’s balconies. Every now and then you hear of some police raid on a house where they find thousands of pairs of stolen knickers. The funny thing is, the house in question seems to always belong to the local chief of police.

This is turn reminds me of a 36-page article I read last night, written by one of my professors, on the ‘Kogyaru’ (‘little girl’) scene in Shibuya, central Tokyo. Her study was carried out in the late 1990s, and focused upon the prostitution boom amongst high-school girls. It was only when the age of these girls started to fall to around 13 or 14 that the media decided that the time for turning a blind eye to this industry, which everyone knew about, was over. Back in those days, or slightly beforehand during the peak of the bubble economy, you’d have men going into these clubs where young girls were working on telephone sex lines, pointing out a particularly attractive girl and paying up to $800 (£400) for the knickers she was wearing. Off they’d come, there and then. The used-knickers industry in Japan is no secret, although I was astonished to learn of the amounts of money that were paid. It continus to this day, although is but a shadow of its former self.

The scene eventually got pretty out of hand, with rival gangs of young boys springing up, using the girls – it all got pretty violent. The police, at a loss as to what to do to get the situation under control, called upon the services of two powerful yakuza (mafia) families who were migrating from Shinjuku. Shibuya was divided between the two, and they soon set about putting a stop to the violence.

The story sounds like something out of some sci-fi novel about some high-tech city that sold its soul to prostitution and drugs. But no, it all took place in Shibuya, and to an extent carries on to this day throughout Japan.

What struck me was how the majority of girls who worked in this industry just did it to raise money to buy their designer bags and makeup. With the collapse of the economy their pocket money would no longer cover the expenses of their former lavish lifestyles – these girls saw themselves as simply using the ‘ojisan’ (old men, literally ‘grandpa’) to fund their next oufit. 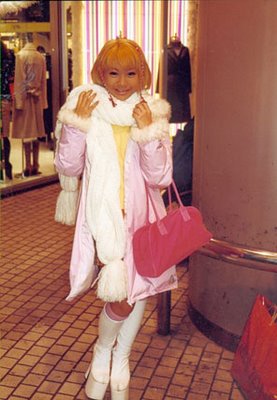 The other thing that struck me was how so many of these ‘wild cuties’ became ordainary housewives, feeling bored and frustrated at home, raising the children as a dutiful housewife should.

That’s something that really does upset me about Japan; the number of people who sacrifice their dreams and aspirations, all in the name of duty, and out of fear of not belonging.

The night before last saw a few of us Sheffieldians gather at Shimo Kitazawa for a jolly nice meal in a basement. (The basement also happened to be a restaurant). Following that we trundled across the road to Motion, a monthly event held at Heaven’s Door (bar) in aid of Oxfam Japan. Caw blimey it was great, not only coz there were lots of friendly people there, but also because there was a magician in the house!

I love magic. It’s like, fireworks. Makes me grin and laugh and applaud and sing, and in this case play an invisible violin.

One of the most impressive tricks involved my classmate and freind Jenny, who was asked to take a card from an invisible pack of cards being ‘displayed’ before her by another volunteer. It was all a bit silly, I mean, there was nothing there! Still, Jenny played along, ‘took’ her invisible card, ‘looked’ at it, and then as instructed by the magician on the stage put it back in the pack ‘upside down’.

The invisible pack of cards was then thrown back to the magician who managed to catch them all (!). He then made them visible again (i.e. had a pack up his sleeve), and started to splay the cards out. It was a normal pack of cards, every card different.

He then said, “Ok, so as you can see, this is a normal pack of cards …but look! There’s one card here that’s upside down, it must be Jenny’s card”. Ok, so no big deal there. We could all see this one card upside down (and thus couldn’t see what it was).

Then came the magic.

He asked Jenny, “What was your card Jenny?”

We all laughed, it was clearly a silly question as there had been no pack of cards. Still, Jenny played along,

The magician then turned the one upside-down card over so that we could all see it, and blow me down, if it wasn’t the 9 of spades!!

It was absolutely astonishing. Jenny insists that she had no contact with the magician beforehand, and I believe her. Like she said, she’s the kind of person who would deliberatly muck it up had he talked to her beforehand!

He did a couple more tricks which were equally amazing, and then finished off by turning the audience into an orchestra, all with invisible instruments playing Beethoven’s 9th Symphony. I played the violin. It wasn’t exactly magic but it was rather funny.

The following act was, erm, orginal.

All in all a jolly good evening.

Anyway, it’s one of those excercise days today, so I’d best be off.