So, I got the call from the Beeb. It was a bit surreal really, listening to the presenters Mat and Liz on my mobile. Their voices are so familiar that it just seemed like they were recorded… not actually asking me questions as they were. I’d done quite a bit of research on disability in Japan, but in the end there was so little time I didn’t really have time to mention any of it. I seem to remember talking about taking tablets for a sex-change and toilet seats catching fire.

Oh well. Shows how little has changed since the phone in to BBC Hereford and Worcester in which I talked about farts, age 10.

At least I got an Ouch mug for my English cup of tea. And Mat asked me if I was a writer… he obviously hasn’t read TDM.

I would like to encourage everyone to subscribe to the Ouch Podcast. Not because I’m on it, but because I think it’s really important that the wider public becomes more aware of disability issues. It also happens to be really funny, being presented by two crip comedians as it is.

After that it was the Sheffield presentation-via-Skype thing. I’ve no idea how that went as it was very one-way. I get the impression people were a bit bored by it, but I don’t think there was much else I could have done. I did my best, and that’s all that matters. I mean, not knowing your audience makes presenting a topic pretty tricky. Not being able to see them and engage with them makes it even trickier. Still, the second we finished the 30-min conference thing, an email dropped into my inbox from someone in the US thanking me for the podcast, telling me how much they enjoy it.

I really appreciate that. It’s what it’s all about. I’m also pretty pleased that I’ve broken my bandwidth limit this month for the first time ever – and this is despite having only released one episode in April.

I’m not saying this to blow my own trumpet. Rather, I’d like it to be taken as inspiration, in a kind of “If that gimp can do it, so can I!” type way.

One thing I am a little curious about is the fact that they needed a native English speaker – when they’ll be dubbing over it in Japanese!

Anyway, after such an exciting day I think it must be bedtime!

Well, that was quite an experience…

Last month, as usual, I went to my local Sen Yen barber (£5 barber), for the normal cut. One of the reasons it’s so cheap is that the service is minimal, I mean, they just cut you hair, and then vacuum your head afterwards. There’s no reception desk, instead there’s a vending machine that you put your money in. Once you’ve paid, you sit down on the chair at the end of line, and everytime someone’s done you all shufty along one place – a bit like musical chairs (but without the music).

Last month, there was a chap working there I’d not seen before. There was also no-one waiting – unusual I thought. Still, in I went, and out I came with a hair cut that I wasn’t overly impressed with, but didn’t think that much about it.

Until I saw my mate Tom.

Did you cut your own hair?

No, no, I went to the sen yen barber.

I later checked it out properly in the bathroom mirror – it was pretty appalling.

A few weeks have passed, but the damage is slow to grow out. Anyway, what with the filming for my national TV debut tomorrow, I figured I should at least try and get it fixed. Thus, last night I set out to search the local area for another barber / beauty parlour place – we’ve been here 6 months but I’ve hardly strayed from the path that leads directly to our house from the station.

I found one just the other side of the railway. It was a bit expensive, but the owner seemed pretty nice, easy to talk to. We chatted for a while, and I made my appointment.

This morning I turned up for my cut, and was greeted by a chorus of irrashaimases, uttered by a collection of pretty lovely ladies armed with scissors.

Tell you what, it was well worth the price. I was treated like a king. Taken from chair to chair for different procedures, fussed about by several ladies, and entertained with idle banter.

It was after the cut, and the tea, and the chocolates, that the service really started…

I must admit, I was pretty surprised when I was asked if I liked being massaged.

My mind went back to the last time I was asked that by a stranger in Japan, it was on the streets of Roppongi, and soon after replying in the affirmative I found myself in a great den of sex. Which I ran away from.

However, on answering in the affirmative today, a bed didn’t unfold from the giant mirrored wall, and the whips weren’t brought out. Instead, I received a very nice massage – although I was a bit curious where she got her hitting-the-customer-on-the-head technique from.

We have a garden! Last night, whilst on my tour of the local area, I found a mini-garden centre. I couldn’t resist but to buy 3 tomato plants, two aubergine plants and some kind of pea plants. In the other tub I have planted a selection of lovely pink, purple and blue flowery plants. They look a bit scraggly but I’m delighted with them! 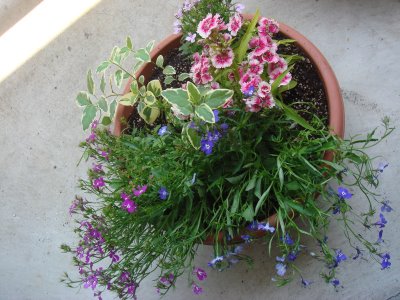 Anyway, must get on. A zillion things to do today! Oh, it’s a national holiday today by the way, bloomin gorgeous. Highs of 27 degrees, me’s happy!

Then after the BBC rings, it’s NHK’s turn

Could this be my big break in Japan? I’ve been on TV over here a couple of times, but never in an acting role.

I just got a call from an NHK producer (the NHK being Japan’s equivalent of the UK’s BBC) about a program that’s being filmed next week. They’ll get back to me tomorrow.

What what Year Abroad Project?!

I made it! The other hopefuls must have been really ugly for them to choose a big-nosed monkey like me out of ten! Filming starts Tuesday. (Ends Tuesday as well!)

[KOSHIPAN] (abbr) (sl) wearing one’s pants low (so that they hang from the hip rather than the waist), pants worn in such a manner

It’s not that they should be worrying about, it’s the face…

I just re-read the mail I sent (in Japanese) to about 50 Japanese friends, the one in which I asked for volunteers to take part in my wedding survey.

I wrote “You can still take part even if you don’t marry me”!

…and all because I missed two characters out of one word.