Yo Yo YO WIGGY!

Ok, so we are now conducting an experiment in Forceable Sobering Up. My spell-checker has broken into a sweat – and we’re only just into the second sentence.

I’ve spent the afternoon in the delightful Shinjuku Gyouen with Stu San (of met-on-a-bus-in-Hokkaido fame), his wife Mariko and about 30 other folks from all over the world who came together to celebrate the beauty of the cherry blossoms. Oh, and drink alcohol. It was great to see Stu san again, who like me was wearing a very groovy hat…

The other folks present were also highly groovy in a yo yo wiggy type way. I met a professional ballerina from Poland, a break dancer from Yokohama, a bread expert from France, a university lecturer from Kent (south east UK) who has the pleasure of teaching Japanese flight attendants English, a chap from Niseko where Stu and I first met on that bus, a Brazillian chap who had the body I am striving to obtain by May 18th, a very drunk girl from Western Tokyo, and a Chinese girl from a place that I didn’t recognise the name of but who nonetheless was absolutely lovely and provided some very useful information for our trip to China later this year. There were lots of other people there too of course. Thousands of them in fact – the park was positively HEAVING with ohanami participants from across Tokyo. 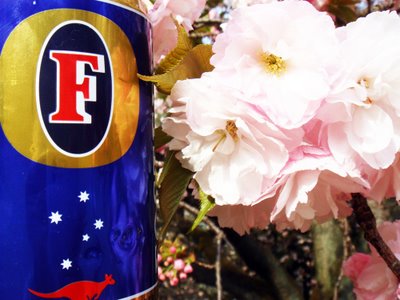 What it’s all about: A can of fosters, and sakura

And with good reason too – the cherry blossoms were absolutely beautiful. Who wants to go to the tarmac’ed Ueno Koen when you have the vast expanse and beauty of Shinjuku Gyouen?

I thought that this scene could be framed and sold as “The Traditional O-hanami”. Here we have two well-presented Japanese girls, exchanging business cards under the cherry trees.

As someone who usually has very little connection with the expat community in Japan, I find these kinds of gatherings really interesting. So many stories, so many pathways. And my god, so many foreigners who speak Japanese! That’s always a bit of a funny experience. The days when Japanese-speaking foreigners were a rarity are certainly over!

All this certainly helped me to forget about what I discovered this morning: I have been systematically deleting all emails that I have received that are over ten days old without knowing it. In January I set up a mail rule that says that any messages from Mixi or MySpace or The Japan Times that are over ten days old should be deleted. Unfortunately I made a wee little error when creating the rule, resulting in exactly 1935 emails that I have received from friends between Jan 07 and Mar 07 being deleted. I had noticed a few emails disappearing, but until today hadn’t bothered to find out why. As my friend would say, “Head > Desk”.

Oh, I passed my exam, and thus can proceed to the next level of Japanese. My chosen subjects for this semester are Japanese language (6 hours per week), intorduction to translation (3 hours per week), and something which roughly translates as “The relationship between humans, animals and the environment”.

“What animals?” I’m wondering. There aren’t any in Japan except for 3 billion pet dogs dressed up in Louis Vuitton pyjamas riding around in bicycle shopping baskets. The rest have all been killed off as a result of the program to cover 95% of all Japan with concrete. Ok, slight exaggeration. There are a couple of bears living in Ueno Zoo.

My cunning plan to get Thursdays off uni would have been thwarted had I failed the test, so it’s a jolly good job I didn’t!

I’ve really enjoyed going to the gym these past couple of days. So much so that I’ve even been considering joining up to the uni gym when I get back in September. I’m actually starting to notice a difference in my strength and stamina. I’ve also cut out chocolate and sweet cakes from the convenience store, something which had become a bit of an addiction. Tomorrow I’m off for a hike again, although it won’t be anything like as difficult as last week’s – that was a killer! 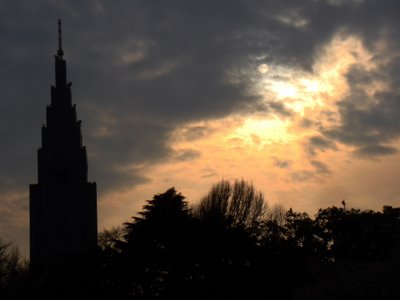 The DoCoMO Biru, as seen from Shinjuku Gyouen this afternoon

The only thing with the uni gym is that it’ll be full of really scary fit young people, not the old fogeys that I get on with so well here in Tokyo.

Anyway Anyway, my mission tonight is to re-learn the basics of Flash animation. I had a dabble 4 years ago – the results of which can still be seen online (I’ve long since lost the FTP details I need to remove it!).