The cheers that erupted all across the campus could be heard for miles as the p.a. system whirred into action – yes, finally Rikkyo has succumbed to the measles outbreak that's now closed at least four Tokyo universities – we were told to leave the campus as soon as possible, and not come back till next week!

The end draws near

When feeling positively overwhelmed by the difficulty of the grammar I’m studying, I try to take comfort in the fact that it’s taken from the highest level of the Japanese Language Proficiency Test (a test I once intended to take, but now I have little interest in).

Recently I’ve had a few emails from people saying, “Oooh, you’ll be going home soon, how does it feel?” etc.

Not all that good to be honest for reasons I explain below. I’m currently planning to leave in early-August, and spending 5 weeks traversing China, Mongolia and Russia. Last night I drew a huge map of the route (using Google Earth as a guide) so that I could get a better idea of where I’ll be stopping off etc. It’s a blooming long way, and is going to take a good deal of organising. For a start there’s the visas – for the Russian one I first have to obtain a letter of invitation (which costs) before I can even apply for the tourist visa.

It’s my intention to keep my blog updated as I travel along the route, and by the looks of things that should be possible. As is the possibility of being continuously drunk on Vodka, it sounds like it’s very difficult to avoid having it forced down your throat. I guess by the time I reach Hereford I’ll have got over my aversion to the stuff.

It’s pretty amazing really though, if you think about it, that it’s possible to go all the way from Shanghai to Hereford by train!

Drawing the map and buying a couple of guidebooks and three phrasebooks (I’m going to need to learn the Russian alphabet! As if Japanese wasn’t enough!), has made it all that more real. Thinking about it, I realised that it’s only about 10 weeks away, an incredibly short period of time. This fact really upsets me. I don’t really feel like a one-year exchange student, I feel more like someone who lives in Tokyo with their partner, and is being told they have to go work abroad for a year. I loathe long-distant relationships, and just with *Twinkle* being away in Kansai for a couple of days (as she is this weekend), well, it kind of leaves me feeling disabled and agitated.

Sometimes I feel that I just want to get on with my life, without the ‘interference’ of uni.

Of course, this is a rather daft point of view. I mean, come on, thanks to this course I am able to do what I do actually love doing – learning – AND I get paid to do it! This is bliss compared to those times when I’ve had to work to pay the bills – I’ve had all my bills paid for me now for 3 years now, and can enjoy the same next year (with a shortfall of about £500 due to an increase in the rent…). (What? Student loan repayments? What’s that…?)

So yes, I’m very fortunate to be in this position.

…anyway, back to the grammar.

A call for urgent action

Climate change is something I feel really passionately about, and thus when I head the latest news about the US outburst against taking action to combat global warming at next week’s G8+5 summit in Germany I was absolutely horrified.

Basically, the Bush administration has told Germany that it refuses to discuss any form of mandatory emissions targets – absolutely vital if we are to avoid irreparable damage to our planet.

Read the article in the Financial Times here.

Sign the online petition here (Avaaz.org has a proven track record of getting our voices heard on the global stage):

Here’s the message leaders will hear:

“Climate change is the greatest threat facing our world today – and we are almost out of time to stop it. You must tackle this problem now, decisively and together. Start working toward a new global agreement this year. Set binding global targets for emissions to avert catastrophic climate change. Take bold action immediately – and we will join our efforts with yours.”

Already 166,464 of us have signed. Can we get to 200,000 signatures by Thursday? If each of us tells five friends, we could raise a million voices by next week’s meeting.

This global summit is the key. Before it’s too late, in these next ten days, let’s raise a global cry that can’t be ignored — to help save our fragile planet, and avert looming danger to millions of lives.

I’ve never really been one for social networking sights. They tend to bore me, with endless memes that are so dull they even make The Daily Mumble look like a good read. Don’t even get me started on Mixi – it clearly points towards the need for a revolution in the education system. What’s extra interesting is that whenever anyone discusses anything that has slightly more substance than “I tried the new potato-flavoured KitKat today, oisshiiiiiiiii” then the comments come to an abrupt stop. I think the fact that Japan is the world’s No. 1 when it comes to blogging speaks oodles about the society. OOOh I so want a good old riot. Everyone tearing their clothes off and racing through the streets shouting “Go and shove an apron up your nose Mr Abe San”.

I only really discovered this social networking site last week. I’ve been registered on it for a while but never paid any attention to it. I’d occasionally get messages through it from a Canadian friend, but other than that it was as meaningless to me as spending more than £30 on a mango.

Then it all happened. I can’t remember who triggered my visit, but anyway, I logged in, and found some tool where it automatically scans your brain and add all your friends in real life to your facebook account.

The thing that really gets me is the way that all these friends from all these different circles all appear on the same page. Notes from friends from when I was at school 19 years ago saying what they’re up to today, right next to abuse and insults from my current uni coursemates. Old work colleagues complaining about how my old boss did something really silly last week, to professor yaffle telling the mice how to clean the ship. Ok, so that last one isn’t quite true, but I think you get my point.

Anyway, basically, the message is, if you’re not on Facebook, get on Facebook, and watch your entire life slosh away down the broadband time drain.

It is said that everything around us is a reflection of ourselves.

I found that to be true today when choosing to alight on the 3rd floor. 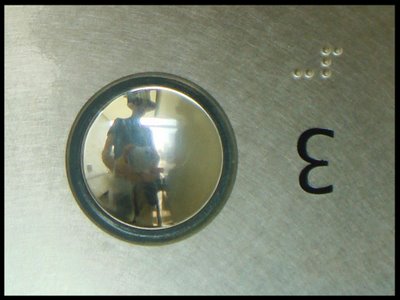