Imagine if you spent your whole life being followed round by a mini-me, that insisted on doing whatever you were doing, back to you.

It would drive me nuts, and thus I really pity this guy.

His brother, meanwhile, doesn’t have that issue. Interesting chap. We sat and had coffee for a while, and chatted about his homeland, where somewhat unusually, everyone except him is purple.

I’ve seen this horse a few times in Shibuya. It tends to frequent the mobile phone shops for some reason. I can’t think why though – have you ever seen a horse using a mobile phone? I mean, how would they hold them? I guess they could stand up on their hind legs and clutch them between two hoofs. Or, they could have bluetooth headsets I spose, with voice dialing.

Hmmm. Something to think about. 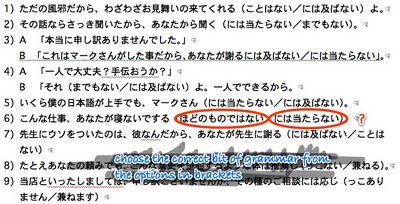 I actually have a tonne of books I’d like to recommend – reading has truly set me free this year – but tonight I just want to pick one in particular, for the benefit of those studying Japanese.

Boys and girls, Hoshi Shinichi (the kanji are ‘star’ ‘new’ ‘one’) is our hero. I’m surprised I’d not heard of him before today. He wrote a tonne of short stories, many only 5 or 6 pages long, which most Japanese should have read (and therefore his books should be in virtually all 2nd hand book stores). Although his stories are read by high school students, they are not necessarily children’s books. The language is pretty simple (i.e. it follows the grammatical patterns we have learned), and the length of the tales means that one can get through a whole story when making the 15 minute train ride home.

Today I bought “Mirai no Isoppu” (Aesop’s fables of the future). In this book, he has rewritten all of those classic stories we know and love and given them a modern twist.

For example, in The Hare and the Tortoise, the hare is stopped by a police patrol car for speeding, because the tortoise bribed the policeman the night before (I think it was bribe, I’m yet to check the kanji).

Another one I recommend is “Uchu no aisatsu” (Space meeting / or A meeting in Space), another collection of short stories. The short story that the book takes its title from is a real page-turner!

Oh, and someone commented on the previous post that they thought I was drunk…? Nope, not one bit. Just retold as it happened this evening in Ikebukuro.

"What country are you from?"

When I answered, the old man behind the counter of the second-hand book store sprang into life, whipping out his gun and shooting me at point-blank range. I laughed, and told him that I loved James Bond too. I love him even more now that I know that he has succesfully taken Beckham out of the picture, and has assumed the role of Stereotypical British Male.