It’s been another good day today. Summer is really on its way now; this afternoon was the first time this year that I’ve got off the train and felt like I was being ‘hit’ by the heat.

Yesterday’s bread turned out to be quite a success, although it was only when I reached the end of the recipe and was about to start my kneading that I noticed it said “makes 2 loaves”. I guess it’s bread for me for the next few days then. I look forward to making many more loaves in the future.

Amongst the things I learnt today:

The most valuable lessons I learnt today did not come in the form of one-line ‘facts’. They concern my way of thinking, in particular adjustments I need to make. Until last year, I had, just like most people, occasionally bad-mouthed people. You know, complained about my boss, about the boring tutor, the guy with the smelly feet on the train. I’ve been working on ridding myself of that habit, and am pretty happy with the results. I do still make slip ups. “Be Aware” is what I repeat to myself.

Today, the idea was put to me that criticising politicians, governments, institutions was just as bad as criticising ordinary individuals. I struggled with this for some time. Surely, criticism is necessary in the case of governments etc, it keeps them on their toes and more inclined to act in our interests.

Perhaps rather then lead to positive outcomes, it leads to further tension. Perhaps by putting our energy into criticising their wrongs, rather than showing thanks for their rights, we are merely contributing to the problem? Perhaps if they came to realise that it feels much better to do good things and be thanked for them rather than do bad things and then have to defend those actions, they would voluntarily act in accordance with what is right.

Of course, that’s a very simplistic example, but I merely what to demonstrate the notion.

I can think of a concrete example of this kind of thing.

The other day I read a book produced by two charities. The book was essentially a report on the state of affairs in some of the world’s poorest countries, and had many shameful stories of the West’s careless abuse of the lives of others in far-off places. Reading this made me feel very bad and upset; you may recall I wrote about it here on The Daily Mumble – I needed to get it off my chest through sharing it.

Around the same time, I read a different publication which told the exciting news of how hydrologists from one of those charities finally discovered a water source in the desert, a water source that will help safeguard the lives of thousands of people whose lives were threatened by dehydration and disease.

The first of these two publications made me feel bad and angry. I shared that anger so that other people also thought, “oh, isn’t that terrible…”

The second of these made me feel so happy and excited about the achievements of those hydrologists that I immediately set about promoting the charity’s work.

“I was once asked why I don’t participate in anti-war demonstrations. I said that I will never do that, but as soon as you have a pro-peace rally, I’ll be there.

I shall make a strong effort to embrace this approach. 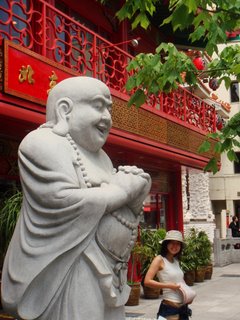 In a bid to help me make this a part of my life, today I decided to stop reading the newspapers, as I have been doing nearly every day lately. I’ve already unsubscribed from the multiple news sites I used to receive hourly updates from: it’s now limited to three headlines a day from what is possibly the most dull paper on Earth (The Japan Times) – a deliberate ply to stop myself wanting to read more.

These past few days I’ve been mulling over an issue I currently have, that of lacking any framework within which to place the many issues, concerns and projects that I am devoting my attention to at present. It was only natural then that today I should receive an email from a friend who’d had a peek at TGW but knew nothing of my quandary , asking if I’d like to have a natter about it (one may be tempted to say “What a coincidence!” but I do not believe one would be right to do so – this is what the Law of Attraction is all about!).

On a final note, there was one thing in particular that struck me today, apart from the fact that my hand is in essence nothing but energy, that being the notion that everything that we see around us started with a single thought. Now that may seem obvious, but if you think about it, really think about it, and then relate it to yourself, well, it’s quite staggering.

This is a tremendously exciting time to be alive.

Now, you must excuse me. I am about to embrace the washing up.