Today was an exciting day for me, as I realised one of my long-held dreams: to own a digital SLR. Whilst the dream may have superficially concerned ownership, it did / does of course go way beyond that. It’s the possibilities that owning a digital SLR open up. I really have missed having control over the photos I take. It’ been a case of point-and-shoot for far too long now, hoping that the technology will see the scene as my eyes see it.

In particular, I have missed having the power of a zoom lens. I used to love my old Nikon zoom lens. The power to focus on something in the distance and bring it close to you. To see beauty and happiness a long way off, and invite it in to your immediate reality.

This was the joy that I experienced once again today, after a 6 year break. I purchased the Nikon D40X Double lens kit (18mm-55mm, 55mm-200mm), 5GB worth of SD cards, a soft case, 3 filters, screen protector and a spare battery. Oh, and I managed to get an English manual too. Those folks at Yodobashi really are great, so helpful. I was also grateful for the 10% discount (in the form of points which I was able to use for a 5-year warranty, spare battery and the most incredible travel-plug you have ever seen. It’ll do every country in the world, yet is absolutely tiny!). 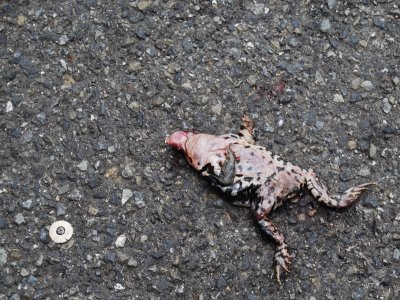 The first ever photo I took with my new camera, a HUGE great toad, looking a little the worse for wear.

Despite the fact that the Nikon D40X is only a so-called ‘entry level’ SLR, I am absolutely delighted with it. I am very impressed with its ability to deal with low-light conditions, with its anti-blur motor (built into the zoom lens), its logical menu system, its good looks and the very nice feel of the buttons. Really satisfying clicks too! Yes, and that zoom is something else. I recall wasting countless shots with my old 35mm SLR due to low light conditions and the lack of a steady hand when focusing on subjects a long way off. I’ve had none of that today.

That rather bizarre religious building near the Russian Embassy

Another feature is the incredibly high-speed USB port – double that of its rival, the Canon EOS / Kiss. This is a blessing: the JPEGs are about 4mb each, whilst the RAW files often amount to over 10MB (I’m not actually shooting in RAW though. Give me a new Mac with more memory, a faster processor and larger hard drive and I’ll consider it!). 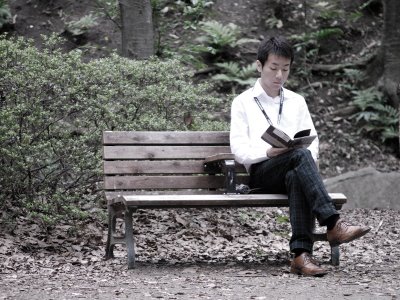 lunchtime in the park

I only have one criticism of the Canon D40X: It lacks any physical feature aimed at avoiding the accumulation of dust on the sensor. Many SLR models these days feature anti-static filters and sensors that physically shake the dust off, but the D40X relies on post-shot software. The way it works is you take a photo of a white surface, which it then scans for any dark spots caused by dust. Then, when you download your shots onto your computer, it puts the images through a clean-up process that makes appropriate adjustments to the images to remove any dark spots that may appear, based on that information it gathered from the test shot.

Salarymen, looking out over Shinjuku South

Of course, one can manually clean the innards of the camera, but this is not generally recommended.

I have had that problem of dust on the sensor in the past – its an issue that can affect any digital camera, although it’s far more likely to affect those that have removable lenses. Two of my Sony Cybershots developed symptoms of dust on the sensor, although until today (having ow seen an example of what it does to photos on the Nikon website) I wasn’t aware that that’s what the problem was.

Still, other than this minor point, which I don’t feel is important enough to put one off choosing this model, I think it’s an excellent camera.

It’s just a shame that I was unable to get out to any photogenic areas today. The camera- buying and Russian-visa-applying took up a lot of my time, thus leaving me with dead toads and salarymen! 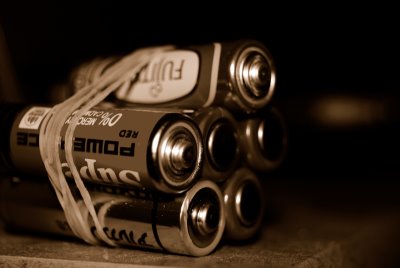 Wow, I certainly know how to waste time.

I accidentally stumbled across a built-in function of my Mac, that being that it can tell a digital camera (such as my D40X) to take a photo, provided its USB cable is connected. It’s a bit weird really, clicking the mouse and seeing the lens do its thing, flash firing and all.

Anyway, I then started thinking how I might put this to misuse, and cam up with the idea of somehow turning it into a webcam.

It’s taken me an hour to figure it out, but it’s all done how. I’ve finished creating my script. I’m quite pleased by it as it does everything by itself, automatically – it goes like this:

1. Mac tells Nikon SLR to take photo.
2. Mac downloads photo off Nikon and deletes original.
3. Mac renames the photo “webcam1.jpg”
4. Mac tells FTP program to upload to internet freshly taken “webcam1.jpg”, replacing any previous version.
5. Simple webpage on TameGoesWild server has been set to self-refresh every sixty seconds. When it does, it loads with the new photo.
6. Mac deletes existing “webcam1.jpg” from hard drive in preperation for next photo.
7. Thirty second pause, then process repeats. Until camera battery dies.

So what could this be used for then? Security camera? I could use it next year so *Twinkle*can watch me sleep…! Or I could point it at the tomatoes and keep an eye on their growth via my mobile phone when at uni.

Of course, it doesn’t really have much use at all, but I just love having succeeded in creating some kind of Heath Robinson webcam out of my Nikon SLR and Mac!