I have a tremendous amount to write about. So much has been going on inside (digestion) and outside (washing-up) of me.

Firstly, a note to friends back home in Herefordshire: I hope you’re ok, and dry. There’s been the most incredible flash floods – as demonstrated by the photo below of the Regal Cinema in Tenbury Wells. I got an excited phone message from mum last night (they live on a hill so they’re ok) telling me about all the army helicopters that had been flying around rescuing people, and the caravans seen floating down the river. Note to self: when I return to the UK, make sure house is nowhere near a river. So, Thursday saw the grand trip to the parents’ place, to announce our engagement. We’d already told *Twinkle’s* sisters our news, and thus, when it came to about 9.30pm (and we still hadn’t mentioned anything), we started to get text messages from her eldest sister (across the room) saying “SO?!! ARE YOU GOING TO TELL THEM OR WHAT?!!).

It was only when her dad said he was going to bed that we summoned up the courage to ask them to sit down with us. Arranged ourselves in a formal kneeling position, and then stumbled over our words as we made the announcement. As a sort of pointless token gesture / joke (as we were all kind of laughing anyway – perhaps they were doing so to hold back the tears of dissapointment…!!), I then asked them for their daughter. It was nerve-wracking to say the least.

Thankfully, they were delighted, especially her mum who just last week was making noises about us getting married. *Twinkle’s eldest sister then produced an ‘engagement cake’, which she just happened to have in the kitchen!

Father then went to bed as he had planned, and I found the next day, when we went to the allotment together to pick tomatoes, that nothing had changed in our good friendship; there had been no sharpening of samurai swords overnight.

It turned out to be a long night though, as after our announcement, myself and Mother started to talk about spirituality, a conversation we began via email last week. It was fascinating to hear her ideas, which broadly matched how I felt (I won’t go into details here). Now there was a conversation I couldn’t have had a year back.

Yesterday we made a trip down Hachioji way to break the news to Grandma. I’ve met Grandma a couple of times before, but it’s always been when she’s come over to the (lively) family home in Saitama, thus have never really had a proper conversation with her.

She was typically thoughtful and fussed over us as Grandma’s too, trying to decide which room would be best to serve our green tea and Japanese sweets in. We assured her that the usual living room would be ok, rather than the formal guest reception room. After an hour or so chatting about this and that (one of the that’s being a video that Tom pointed me in the direction of, which i thought was absolutely fascinating: The Boy with the Incredible Brain – someone hit me round the head with a rolling pin!), Satoko broke the news to Granny: she was absolutely delighted! Having been born in the 1920s, she maintains the thinking of her day, when there was always concern if women had not found a suitable partner by a certain age. It really was wonderful though to see her happiness; she’d go on and on with her congratulations, talk about something else, and then suddenly go back to thanking me!

She then went on to talk about her wedding, and told us how in her day the wife was not permitted to use the front door of the house – instead, she had to scurry round to the back, and always be ready to greet her husband when he returned home. (The literal translation of the Japanese word for ‘wife’ can be “woman in the back”).

After leaving grandma, *Twinkle* headed back into town to meet a friend, whilst I wandered around the grounds of the local temple, which sported a beautiful pagoda.

As seems to always be the case, now that I am “on holiday”, I found myself snowed under with stuff to do. Booking yurts/gers in Mongolia and trying to negotiate with Russian travel agencies has taken up a considerable amount of time. As has socialising.

Stu (left) celebrates his 18th birthday whilst Jon pours him another Tequila in what was a very fun party – complete with radio controlled helicopter.

I”m wondering, who looks the most idiotic?

I met up with Brendan again – introduced to me via email by a mutula friend whom I worked with in Switzerland 6 years ago. I’m trying to figure out who looks the silliest in this photo, taken in a giant games center in Odaiba. It’s quite an interesting games centre in that despite having a huge gambling arcade, it’s impossible to make any money. If you win on any of the slot machines, you ca’t do anything with the tokens but use them again. You can’t exchange them for money (which is illegal in Japan), and you can’t even exchange them for prizes which one then sells at a nearby kiosk for real cash, as is the case with most gambling arcades in Japan. Thus, any money you spend on buying tokens, you are guaranteed to not get back in any form except more tokens, which can only be used there. You would have thought that this system would result in a rather quiet gaming parlour – not so. 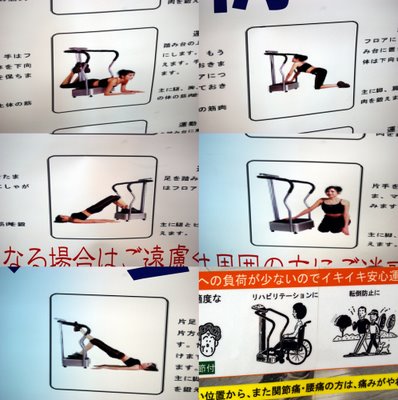 They had a huge line of these strange exercise machines – not a single one being used. We wondered whether anyone would ever really be inspired enough by these pictures to actually give them a go. We also noted that the machines, surrounded by plastic walls that prevented wheelchair access, would be used all that much by wheelchair users…

In a bid to elevate ourselves to another plane, we boarded the ferris wheel, which apparently is one of the tallest in the world. It was pretty damn high actually – taking us right up into the clouds!

I am pleased to announce that the vegetable pot is coming along nicely. We have now harvested about 10 tomoatoes, whilst the aubergines are swelling marvelously.

Watermelon season is well and truly upon us now, as demonstrated by the fact that these wonderful fruits are actually becoming affordable now.

Unless you go for the famous square variety – this one, which I spotted in an Ebisu supermarket, is sporting a price tag of £84/US$170.

The other day, whilst on my way to the Chinese Embassy, I passed through a lovely little park which was home to a whole squaggle of ducks.

Including this one, who clearly feels that he was a dog in his last life, thus the tattoo of a cute little puppy that he had inked into his beak.

I also paid a visit to one of my favourite parks in the city, located next to Tokyo Big Egg at Kourakuen.

One sometimes wonders whether the Japanese know that the war’s over – these lawn-weeders are clearly prepared for an aerial bombardment.

I think you’ll agree that this chap looks mighty fine in his bunny costume, as captured from a second-floor window in central Shibuya.

I’d like to introduce you to Pepe, Pepe the Penguin. He plays a significant role in my Masterplan for Global Domination.

You have been warned.

Nanny State
Anyone living in Japan will of course be familiar with the advertising campaign by Japan Tobacco which, whilst superficially is trying to make smokers more considerate of others, is actually just an attempt to make smoking socially acceptable.

Despite the fact that they are promoting suicide and murder, I can’t help but like them.

(Incidentally, the English and Japanese are identical in meaning, this isn’t a case of poor translation)

To further promote the idea that this is just a campaign in manners and not a campaign to encourage people to fill their lungs with cancer-causing chemicals, it seems that Japan Tobacco is moving into other areas of our lives…

This is perhaps my favourite.