Last night, lying on my bed exhausted, I picked up my remote control and began to idly browse my music library. There’s so much stuff in there that a lot of it is rarely heard, buried beneath thousands of other songs that have been lucky recipients of a couple of stars at some point in the past.

Flicking through the album art, I noted how each album cover summoned up different emotions within me – many of these images signified far more than the sounds I would hear if they were selected.

It was then that I came across Astral Weeks.

1968 was the year that Van Morrison released this record, a record that was to become a landmark in my life.

I remember that time well.

I was age 23, living in Switzerland. Kussnacht-am-Rigi. “Lord of the Rings Country” I called it, what with its rolling hillsides, deep blue lake, and mighty snow-capped mountain rising to dominate the horizon.

I was initially drawn to this place, a family-run dairy farm, by the description of its owners, Fredi and Antonia, in the International WWOOF handbook. 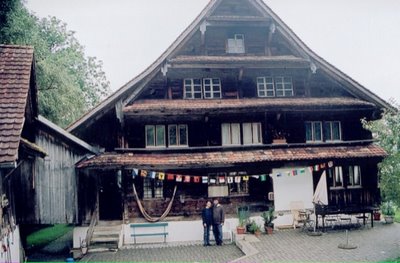 They were described as being a kind couple, who hoped to provide an atmosphere that enabled people to work through difficult times by helping in the daily routines of the farm. Living in an old, traditional Swiss chalet, they played host to a couple of young lads from the Dominican Republic who had been abused as children. To Hans, a man in his 40s who had never felt happy fitting in with society and preferred to spend his evenings in quiet contemplation, surrounded by books on woodwork and philosophy. To Suzie, a local girl who’s mother had passed away, leaving her with an abusive step-father.

Having just emerged from a difficult two-and-a-half year relationship myself, I decided that I’d fit in perfectly. 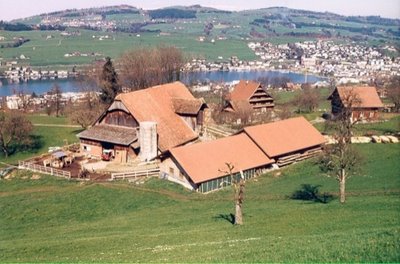 The routine followed that of a typical dairy farm. Up at 5am to milk the cows, muck out their stalls, feed the sheep and pigs and then go out to work on the land. The previous Christmas had seen severe storms in Europe, so much of our time was spent chopping, transporting and stacking wood. It was a very therapeutic exercise: over the course of several months we transformed the landscape from one of chaos, destruction and disorder into one that was once again workable, the nature-felled trees now arranged in neat piles of 2-foot long logs, ready to fuel the family over the long cold winter.

This work outdoors mirrored the changes going on within me. During that time I was able to work through the crap that accompanied the breakup, every swing of the axe serving to cleanse me of the anger I felt. At night I would disappear into the work shed and chisel away at a block of cherry that was to become a wooden owl, a gift for my now ex-partner that was to help me apologise.

It was after I’d been there a few weeks that I discovered an old vinyl copy of Van Morrison’s Astral Weeks. Wow, this really knocked me for six. The confusion, pain, love …and glimmer of bright hope it held touched me where it was hurting. I listened again and again, sometimes in floods of desperate tears, sometimes with so much joy I would feel compelled to climb to the top of the mountain on whose slopes we lived, and shout it out to the world.

He would sing me to sleep at night, he would wake me in the morning.

That time was very important for me; its legacy lives on in who I am now. My trust that I can work through difficulties and emerge stronger. My love of self-sufficiency. My belief that surrounded by love and honesty, even the most hurt people can be healed.

That time is referred to whenever I say my name: up until then, I had been ‘Joe’. It was only then that I had the strength to cast aside the mask, and start to get to know the boy Joseph.

Listening to Astral Weeks now, I’m transported back to that time of growth. Remember those creaking floorboards? I used to wince with every step as I’d come in late at night from the woodshed, trying not to wake the rest of the family who slept at 9pm. Oh, and the dog! It was vital that I try and get her to see me before she heard me, otherwise she’d erupt into a chorus of howls.

There was no insulation in the chalet, and I recall showers in the outhouse being a ‘bracing’ experience. I remember the lock on the door too. I piece of wood hanging on a nail.

Meals stand out in my memory too, had as they were as a family, seated around a huge round table that almost filled the entire room. Breakfast was always the most delicious muesli, with milk straight from the udder (had a hell of a time getting the cow to stand still on the dining room table…) and fresh berries from the hedgerows. Lunch tended to be lovely wholemeal bread, home-baked in the log-fired Ager, topped with either local cheese or jams made by the grandparents who lived in the chalet next door. Supper often featured steamed potatoes and other assorted vegetables from the garden, accompanied by some kind of grain.

As mentioned before, most of the family retired to bed early, but there was usually time for a little talk. Freddi was a great comfort, his limited English ability and my poor German not really standing as any barrier to our communication. Antonia too, mother to all, remarkable. Drama would be provided by the boys from the Dominican Republic working through their histories, peace by Hans, normality by the Freddi and Antonio’s own children age 7 and 9.

I’ve not been in touch with the family since I last saw them, 6 years ago. It is important that I see them again in order that I may thank them, thus, when I do next make my way to Switzerland, Kussnacht-am-Rigi will definitely be on the schedule.

And of course, van Morrison’s Astral Weeks will be playing as I make my through Tolkien land, up from the shores of the lake below to the old chalet on the slopes of the snow-capped mountain.

It seems that others have also found Astral Weeks to be a great comfort in difficult times: Link