I’ve just had the most extraordinary experience. Completely unexpected. Looking back at it now almost makes me laugh.

A while ago, I met up with a friend who was having a very difficult time. They had been made redundant, the victim of a personality assassination campaign carried out by an individual (their boss) who felt threatened by their lovely nature and care for all.

I can’t remember exactly what we were talking about – it might have been giving up smoking or something, but they mentioned that they’d been using some books by Paul McKenna.

What? Paul McKenna, that hypnotist on TV? I started laughing; he was just another of those celebrity-magicians – he didn’t rate in my book (especially not when compared to the God of TV magic, Paul Daniels, with his beautiful sidekick Debbie McGee who never seemed to tire of having swords stuck through her stomach).

For my birthday, Mum’s #2 & 3 very generously gave me some Amazon vouchers. Long frustrated by having a USB key the size of an elephant on steroids, I shopped around for a new slimmer version. That found, I proceeded to the checkout. …but the order was just under £15 – I was going to be charged postage.

OK then, let’s add something else to my basket. It was then that I recalled my friend’s mention of Paul McKenna, and the positive impact that he had had upon his life. I poked around the site a bit more, and found a cheap book of his with a nice corny title, typical of so many self-help books these days.

I CAN CHANGE YOUR LIFE IN 7 DAYS

The 4 gigabytes of pure USB sex arrived this morning, along with the McKenna book, which contained a free CD. Whilst creating my “If Found” text file for the USB stick, I slipped the CD into Baby Macbook for transfer to the iPod. As it ripped it, so it played it.

It sounded almost as corny as the book title. After a couple of minutes, I switched off – I’d listen to it some other time.

About an hour ago, I settled down in bed. Tired of run-throughs of my speech, I decided to read a bit, and picked up Paul’s book, making quick work of the introduction. Having read quite a few self-development books over the past year or so, I was familiar with much of what was said; the promises of what could be achieved, the importance of Living in the Now etc.

There’s rarely anything new, but it does help to be reminded of these fundamental truths (which are working for me), and if this is done in a new and refreshing manner, then all the better.

That done, I thought I’d give the CD a go (just ignore that warning for people with epilepsy…).

It was here that things got interesting.

Paul guided me into a relaxed state, encouraging me to concentrate on my breathing, and let go. So far, there was little by way of departure from other meditation guides I have, but none the less, I decided to remain totally open, to cast off all doubts as to the usefulness of this guide and follow the directions given.

I guess it was after about 10 minutes that I first noticed something funny happen. Now before I go any further, I’d like to say that I am sure that what happened was something that happens to a lot of people, and there is no doubt some physiological explanation for it. Nonetheless, it was a first for me, so I’ll describe it anyway.

Usually, I find meditation very difficult – my mind flits and wanders all over the place. But tonight, I found it to be relatively subdued, resting on my breathing, which somehow seemed to be taking on a life of its own. It wasn’t just regular breathing – it started to deepen, my lungs filling to capacity. Then, it started to quicken. It felt good, and at one point I let out an involuntary gasp of laughter. After a few minutes of this, I suddenly became aware that I could feel the blood flowing through every part of my body. It wasn’t like being consciously aware of my foot or something, it was more like my entire body had a strong electric current buzzing through it. I felt almost frozen by this powerful force – just like in that electric bath in the public sento in central Kyoto.

It wasn’t an unpleasant sensation. When I moved my hand slightly, I felt the electricity surge as my fingers moved across the duvet. I was gripped by this forcefield.

I can’t remember what was being said at this point, but whatever suggestion was made saw me turning my attention away from my physical body, and into my ‘mind’. What happened next was truly wonderful. With my eyes closed, and no particular thought in my mind, a scene opened up before me. It was a dark landscape. Not hostile …more like space. Through this landscape, from close beside me on my right, sweeping off into the distance to the left of my field of vision, was some kind of barrier, like a superficial separation of worlds. This barrier wasn’t hostile either, it was just an organic division.

As I explored it with my vision, I found, in front of me, a little way off, a kind of opening in this barrier, sort of funneled rectangle shape, but with soft undefined edges. And through this, energy was pouring in to the where I was.

And then, suddenly, I realised what it was – this was the energy that was sustaining me! It was pouring through from an infinite source, connecting me to whatever was beyond.

Lying here in bed with my headphones on, I started to cry with happiness.

As my breathing returned to normal, so the vision faded. Feeling somewhat dazed, I opened my eyes. The 30-minute CD was coming to an end: I was being told to come back to the here and now.

Once wide awake, I sat up in bed and burst out laughing, tears still rolling down my cheeks. I laughed with happiness …and at the thought that Paul Mckenna, of all people, had led me to have such an experience.

I mentioned before that this was the first time that I have had this kind of experience. However, strictly speaking, that’s not quite true. I have actually had several experiences of this nature, however, they were about 13 years ago, and all of them were induced by the consumption of either multiple joints or about 50 magic mushrooms. I do recall having intense trips when I felt surrounded by love, and I could feel the blood pumping around my body, but then I also recall intense trips when I was surrounded by wrought-iron gate-posts – “Thelda” and “Welda” were the two who made repeat appearances – at one point there was even the idea that my brother and I write a children’s book about them.

So whilst tonight’s experience did in some way resemble those of my teenage years, it also differed significantly, in that I was still very much conscious and in the here and now.

I’m not quite sure what to make of it all really. Part of me keeps on talking about chemical reactions in the body, breathing induced changes in blood flow, but another part of me feels there was more to it. 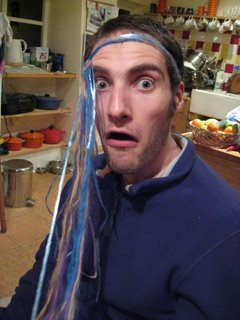