I never thought I’d see the day: an hour spent procrastinating by doing instant messenger – with my mum and dad. Just show how times change, and that you can teach old parents new tricks!

It’s been a pretty full on week. Lots of meetings for this that and the other, and then there was Wednesday – when I had a pint of beer. That really threw me. Drunk after a few sips, and emotionally de-stabilised for the following 24 hours.

I was thinking afterwards how deciding not to drink alcohol as a matter of course has been the single-most positive lifestyle choice I have made this past year. When I drink, whilst in the short term I may feel more ‘relaxed’ (with immediate causes of concern fading into insignificance), as the hours progress so I become more emotionally unstable. We’re not talking bursting into tears or anything, more, unable to effectively deal with emotions, attaching undue weight to them and ultimately feeling controlled by them.

The following day I will often feel somewhat depressed, which in a way is far more dehabilitating than any hangover I might have.

With this is mind, I’ve come to appreciate that far from making life more fun and manageable, in the long term, drinking makes a life a lot harder. My nervous system has enough to deal with just being in this world – having to cope with the stimulant and depressant properties of alcohol doesn’t exactly help.

Drinking also makes life a lot harder for those around me, and especially those who are closest to me. *Twinkle* feels quite grateful that I have stopped drinking. It can be difficult having a meaningful relationship with someone who drinks regularly, partly as they are prone to forgetfulness and cease to play by the unspoken rules that help maintain trust and understanding. (It also means no more nights trying to lead a Joseph home who is insisting that he talks to all the road signs along the route).

I remember the birthday party of a friend that I went to a few years back. I recall sitting at the table (or perhaps this memory is actually just based on the photos) and having a long conversation with the birthday girl. A few weeks later she thanked me, and told me that that conversation had meant a lot to her. My reaction? I was pretty embarrassed, I couldn’t remember it at all. Realising this, my friend’s smile disappeared in disappointment. I felt very bad, almost as if I had conned her.

Since then, whenever I’ve drunk I’ve worn a bow-tie with a built-in MP3 recorder.

What I find interesting is how when I did drink as a matter of course (and did not necessarily get drunk in seconds), I never really noticed these negative side effects. There was no post-drink depression, it was just another day. Thus, I wonder, did I feel somewhat down in general and thus noticed no difference, or was it simply a lack of acknowledgment of the effects upon my emotional wellbeing?

When Joseph Gets Drunk… 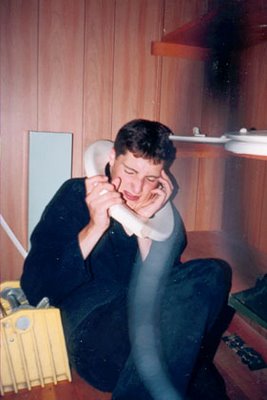 I’m not an advocate for a Teetotalistic revolution – for one thing, we need drunk students in order to support Higher Education in the UK (Sheffield Union’s Bar One is probably one of the most profitable bars in South Yorkshire!). And I know that alcohol has helped me hundreds of times in the past feel able to deal with social situations.

But now, for me personally, no alcohol is good, and 8 months after I stopped drinking I can’t ever see myself starting again. (Watch this space!)