As part of my prep for leaving for Japan, I’m going though my box of diaries, which also contains a few DVDs of TV programs featuring me or my friends, and converting them to MP4 format which I can keep on my laptop.

One of them I’ve not seen for years is the documentary made about my home of two years up in the Swiss Alps, Kleine Scheidegg. It’s extraordinary seeing all those familiar faces again. Albert our station master. Tomoko who worked in the buffet. My boss, Andreas, and other colleagues from the hotel. 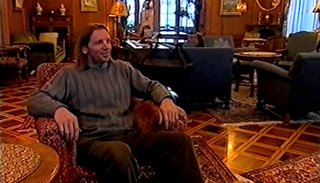 Tomoko. She was very strong. I was a little afraid of her.

These memories will be with me for life. Watching Tomoko go up the stairs of the station building I’m taken aback by my sudden recollection of the smell of the place. It’s not that it was particularly smelly, but it did have a distinct scent, a cross between wood, clean toilets and bratwurst sausage. It’s amazing how much information I must have stored in my brain, all these little details – like the train conductors shouting “achi achi” (That way that way!”) at the Japanese tourists in a Swiss-German accent, or the trains with their electric folding wingmirrors.

Oh! And there’s Phil, from South Africa. He worked as a photographer with Benny the dog. Benny would pose with his brandy barrel in the midst of great gangs of Japanese tourists, the must-have Swiss shot to take home to their families. 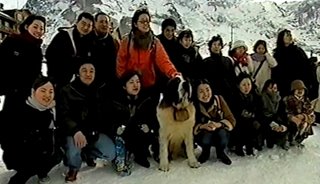 Having these records of past lives helps me appreciate just how fortunate I’ve been to have had these experiences. We’ve all had them of course, but I personally find it difficult to remember events that happened a long time ago unless I have a trigger – such as a photo or film. I don’t want to forget, they’ve all been such an important part of making me who I am today.

I used to take it to extremes. When I was age about 14 I’d always read my diary entry from exactly a year ago. It became a bit obsessive, and I remember worrying that I was becoming stuck in my past.

I like to think I’ve found a healthy balance now. A balance between appreciation for what has gone before, planning for the future, and focusing upon the here and now.

I visited some friends last night who are helping a great deal with the wedding. I lived with one of them, Frances, for about a year in the very same Hotel Kleine Scheidegg as featured in the documentary above. She became a dear friend to me, and seeing her again after what might even be years without meeting reassured me that we are still close. It was such a meaningful experience to sit and talk with her, and observe how we’ve both changed since our time in the Alps. People like her make the world a very happy, caring place.

Frances, about to throw a snowball at me The wedding is really starting to take shape now. This evening I spent some time painting elephants on jam jars for the nightlights on the tables. That was very therapeutic, and helped me unwind after yet another day of sorting through belongings and assigning stuff to the recycle or charity shop pile.

I think *Twinkle* and I are going to have to work very hard together, especially over this coming year. We’re both capricorn, both very ambitious, both with strong personalities. Of course, we differ in many ways too. For a start, she’s much cuter than me.

I hope that I’m far enough along the relationship road to have learnt to not put pride or ego before love. It’s going to be a challenging education, being husband to *Twinkle*, but I’ll do my absolute best. She’s worth every bit of energy I have.