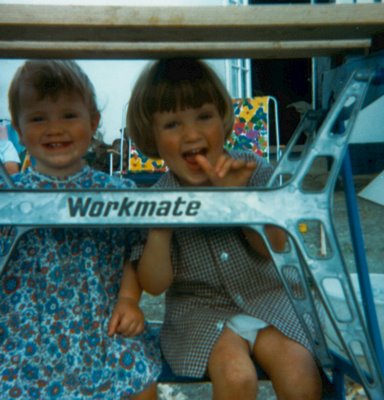 My sister Jessie (left) and I, age: quite young

Personally, I’m yet to feel the effects of the global economic slowdown. I’ve not been made redundant, my salary has not been cut, overtime is still allowed.

But I can feel it’s just around the corner. Local redundancies are being announced on a daily basis, and the thinking is that it’s just going to get worse. One of my private students was telling me how her company, once reluctant to fire anyone (something that is admittedly pretty difficult to do in Japan – the common method seems to be to bully and pressure people into quitting) has just announced 2000 cuts, with more to come in due course. Whilst the nature of the client base that the English & Chinese education company I work for means that we are not suffering so much from this initial phase of the slowdown, this past week there have been some hints that next year is going to be a tough one.

I’m very much a subscriber to Robert Kiyosaki’s idea of there being four main types of people when it comes to income, who together make up the ‘Cashflow Quadrant’. They are: E – employees, S – self-employed, B – business owners and I – investors.

I’ve long had a gut feeling that I don’t belong in the ’employee’ quadrant, and in such economic conditions as these I find this gut feeling being exceptionally noisy. Seeing people in ‘secure’ jobs being left high and dry makes me question the sense of placing my future in the hands of an organisation that could let go of its staff at any time, for any number of reasons.

If I was working for the satisfaction that the day-to-day work brings, then it would be no big deal. Whilst I do feel real satisfaction in my day job (and before I go any further, I’d just like to state that as well as enjoying my day job a great deal, I see it as performing a very important and necessary role in my development, and I have no intention of leaving), I have a strong feeling that I’m heading towards a very different role in this world, of which I have only a vague picture at present) (this is aside from any purpose I have to become a better person in a spiritual sense, a journey that continues no matter what I do).

Whilst I am happy that I am able to make a positive impact upon the lives of my students and (to a certain extent) my colleagues, I can’t get away from the idea that ultimately, the main purpose of most companies is to provide a good return to the shareholders. These are shareholders of which I know nothing. Who knows what they might choose to invest the profits of my labour in.

Some people might think this is taking things a bit too far, but I don’t feel it is. I have a limited time on Earth this time around, and I want to make the most of it. I am happy to invest a few years in doing such things as working for my present company as I’m learning a lot, and teaching is a worthy cause, but I believe that I would feel that I had somehow wasted the precious gift of life were I to remain working for someone else for the rest of my life.

So then there’s the S quadrant – self-employed. One thing I’ve been fortunate to learn second-hand over the past few years is that being self-employed isn’t necessarily all it’s cracked up to be. For one thing, there’s the fact that (for most one-man-show enterprises) if you stop working, your income stops. Then there’s the hours. I forget what the stats are, but self-employed people usually work a lot more hours than those in the E quadrant. Having said that, the chances are that the self-employed business owner will get a great deal more satisfaction out of their work than an E. Every hour of work they put in is an hour invested in their own enterprise – an idea which appeals to me a great deal. They are also more likely to be doing what they love (or they probably wouldn’t have started that business in the first place!). However, ultimately, the lack of time freedom in the S quadrant does not appeal to me.

Then we move across to the B quadrant – the business owners. These are people whose businesses continue to operate even when they are physically absent. This is where I want to be. This is where I feel I should be putting my energy …but find the ease with which I can invest in the E quadrant too seductive. Striking out is tough. It’s easier to just be told what to do.

The final quadrant – our ultimate financial goal, is the Investment quadrant, whereby the wealth we have created will continue to generate an income in perpetuity, for the causes that we choose. Being socially conditioned, I used to think that people in this quadrant had only got where they were by trampling on others. However, the more wealthy people I meet (here in Japan), the more this stereotype is revealed as being a load of crap. They are by far the most generous, caring and ‘normal’ people you could hope to meet, and don’t give a poop about keeping up appearances. They are generous with both their time and money, and in my book are worthy role models.

These past few weeks I’ve been making my way through The New Psycho-Cybernetics by Maxwell Maltz, an updated version of the classic self-development book. It’s very good. Informative, and inspirational. Whilst there’s not much in it that you haven’t heard somewhere else, the scientific angle is refreshing and convincing.

…and it really gets you thinking – “If I could be the person I really wanted to be, would I be the person I am today?” If the answer is no (as it is with me), then there’s clearly a need for action.

It’s compelling. Real change doesn’t take months of years, it takes a split second – the split second it takes to make the decision to be that person. That person who is fit (or on the road to fitness), that person who owns their own successful business (or is in the process of setting it up), that person who has rich, loving and trusting relationships with all those around them (or is making a concerted effort to build such bonds).

I’m in an incredibly fertile environment that is brimming with opportunity. It’s called life, and it’s time I took the next step (even if it’s only a small step). I’ll write about it in due course.