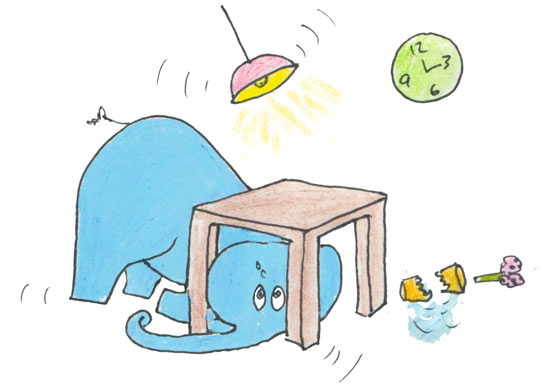 What with all these earthquakes we’ve had lately here in Tokyo I thought I’d take a look at some pretty cool technology that might actually save your life when the big one hits.

But first, lets go back to Tuesday 5am when south eastern Japan was struck by a quake that registered 6.9 on the Japanese scale. It was the first one I’d experienced since moving to our 30 year old house in Meguro, and boy did it freak me out. In order to survive tremors, Japanese houses are designed to be flexible – rather than try and resist the movement, they go with the flow – thus walls will sway, glass-doors will bang against each other and bookshelves will attempt to walk across the floor (unless you tether them to window frames as we’ve done).

When quakes strike this place however, it sounds like a chorus of old wheelbarrows playing along to a symphony of barn doors – the creaking and rattling are loud enough to convince you that the place really is about to fall down, even if the quake is only a relatively minor one – such as this week’s – which whilst a 6.9 at the epicenter a couple of hundred miles from Tokyo, was only a 4 on the Japanese earthquake scale here in Tokyo.

In a major quake, Twitter will be the death of me

Rather worryingly, looking back at what I chose to do during this earthquake made me realize that technology may well be the death of me, as whilst *Twinkle* was hurridly getting dressed ready to run for the door, I was desperately trying to be the first one to get news of the quake out on Twitter and the other social networks, whilst simultaneously trying to judge if the house was going to fall down.

(At least if I were to be trapped in the house due to twitter activity I’d be able to tweet my location using the iPhone’s GPS function, complete with a video showing what it’s like to be stuck under a pile of rubble. Being a regular user of the Tokyo Metro, I have plenty of practice of using my iPhone in places where the only movement one can make is a twitch of the thumb).

Getting information on earthquakes in Japan: the Met office’s early-warning system

Following that, heart pounding but brain still asleep, I desperately stabbed at the keyboard trying to remember the web address of Japan’s meteorological office that provides reports on earthquakes. This website will be the first to be updated whenever there’s an earthquake in japan – typically about 1-2 minutes after a quake strikes, thus it’s a good one to bookmark and add to your iPhone’s home screen.

A few moments later the quake ended, and as I scanned through the live updates of other Twitter users in Japan, so my eye was caught by one written by @genkiu:

“My Cellphone just gave me a Red Alert before the quake. That is soooo cool.”

What? You have to be kidding me!

Well, it turns out that Japan’s early-warning earthquake system, which began operation a couple of years ago, now not only automatically sends alerts to train lines and elevators, but also to cellphones on the NTT DoCoMo and AU networks in the affected area.

How the early-warning system works

First installed in 2006 for government and industry, and then expanded to include the general public in 2007, Japan’s early warning system is one of the most advanced in the world. The principles of the system are pretty simple. 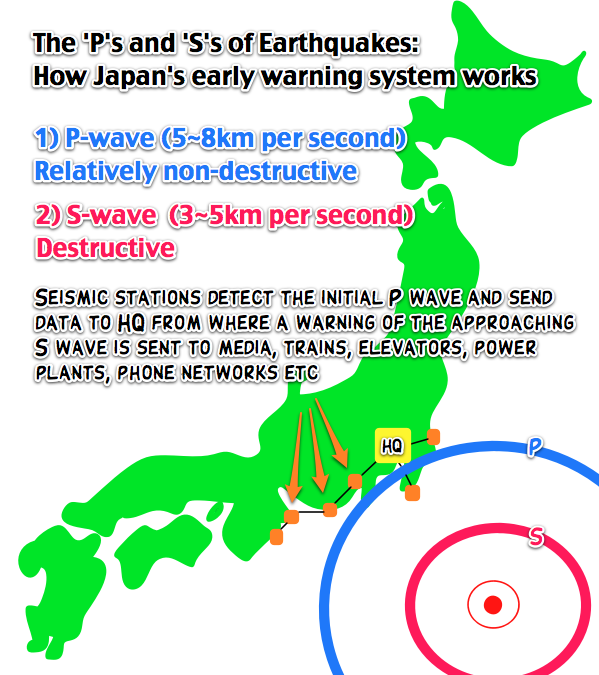 Earthquakes produce two waves: the first is the faster ‘P’ wave which is relatively non-destructive due to its relative lack of shakiness (technical term that).
The second is a slower ‘S’ (Secondary) wave – this typically moves at about 60% of the speed of the first, and is highly destructive.

The Early Warning System basically works by detecting that faster P wave, calculating the intensity and epicentre location using data from multiple monitoring stations, and then automatically sends a warning to the network used by end subscribers (such as nuclear power plant operators and cellphone companies).

Of course, the closer you are to the epicentre, the less warning you’ll have.

How to get warnings of incoming earthquakes on your cellphone

Here’s links to instructions for the different cellphone networks (Japanese)

Switching this function on is easy – its just a matter of selecting it on your handset menu – as I did with *Twinkle’s* (in the Cmail menu, 4th option).

A few seconds before a quake strikes, you’ll be alerted by your phone making the sound of a claxon and a text message providing basic information on the strength and location of the quake. This will give you time to crawl under a table or dive to the other side of the room to catch your TV.

If you’re an iPhone user, whilst we can’t yet get early warnings from Softbank, there’s a very cool app that does give you all the vital details within minutes of it occurring. It’s called “今日の地震+” (Kyou no jishin + / Today’s Earthquakes+), and once installed, this free app will automatically push the details to your iPhone like an SMS, typically within a few minutes of it occuring. Note that at the moment the push service is over-subscribed, but they are enabling it for 1000 more users every day.

Speaking to my Japanese teacher @namynami, I heard an even more incredible story of the early warning system in action. A friend of hers has recently moved into a new apartment block, which is equipped with the early-warning system. This week, they were woken by a pre-recorded announcement warning of the quake no less than 24 seconds prior to it hitting – ample time to get on twitter and warn the world before the internet connection is severed by a building collapse.

It should be noted that this amount of pre-warning was only possible as they were situated a fair distance from the epicentre (the epicentre was to the west of the Izu Peninsula, they live in Chiba), but nonetheless, very groovy.

As mentioned above, new elevators also use this system. Until now, they’ve had to make do with standard motion sensors. Located at the bottom of lift shafts, when a quake strikes they automatically apply the brakes. However, more recent elevators have a second sensor mounted at the top of the shaft, which is connected wirelessly to the early warning system. Upon receiving notification of the incoming quake, the lift will stop and wait. Then, when the shaking’s come and gone, the elevator will slowly move to the nearest exit and open the doors.

All gas metres in Japan must by law have motion sensors so as to switch off when a quake strikes. It would only make sense to add a remote trigger operated by the gas company via the government’s early warning system (perhaps this is already being done?).

There are many techniques used to earthquake -proof buildings.

For example, Yokohama’s Landmark Tower, the country’s tallest building at present, was built using a special structure similar to that used in the construction of traditional Pagodas (none of which have been felled by the many earthquakes that have hit Japan over the past few hundred years).

There’s also of course houses built on ball bearings (not unlike the one that fell down in this video), those with balls suspended at the tope of them (see the one in Taipei 101 in action) and more recently floating buildings.

One can see though that this really is only the beginning. As the early-warning system learns so the alerts should become more accurate, and of course we’ll see all phone operators signed up to provide warnings. Additionally, wireless technology will continue to develop, allowing more devices to easily receive warnings.

But it also won’t be long before we start to see alert-equipped shoes. Upon receiving the report wirelessly from Japan’s Met office, they will deploy these miniature wheels and drive you out of the building you’re in to the nearest open space. Don’t believe me? See the picture 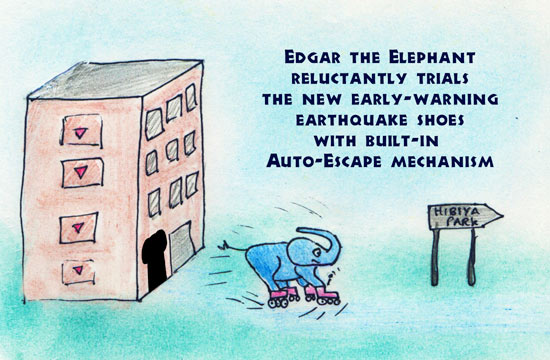 One of my worst earthquake fears is that our Laura Ashley T-pot will fall off the top shelf and smash to ground when the big one strikes. However, early-warning anti-smash pad prototypes for things like T-Pots and glasses are now being developed. Ordinarily, they’ll just be like miniature coasters stuck to the bottom of your best china, but when the wireless alert is received, a tiny suction capsule will be triggered, locking the T-pot to the surface it’s standing on.

Additionally, new conveyor belt sushi restaurants are being equipped with emergency-breaking systems, and the chairs of Japan’s workaholic salarymen now often come with hydraulic seats that flip them under their desks, along with their computers.

Japan Tobacco is constantly looking for ways to improve its image, whether by teaching us what is make-up we don’t want to see or by sponsoring a volleyball team.

They are now planning to turn their network of 45,000 cigarette vending machines into emergency shelters*. When a quake strikes, the vending machine will open, allowing small children to step inside and be protected from falling buildings. Cynics point out though that this is just another attempt to recruit smokers, as the meals provided inside the vending machine (enough for up to three days) are laced with nicotine, and when one’s finished eating a recorded message comes on saying “Time for an after dinner cigarette perhaps?”, presenting a free box.

Well, whatever their motives, I think these innovative uses of technology to make our lives safer are very welcome. No doubt we’ll see great leaps forward in earthquake countermeasures, so when the big one does finally strike we should fare better than they did in 1923.

* This is not true