Looking back at the past month of entries on my blog, I see that I’ve completed neglected to talk about how things have panned out since I left White Rabbit Press at the end of June. The reason for that is simple – I’ve been extremely busy with new projects, and have not really not had any downtime.

I’d like to start off then with a brief summary of what I’ve been up to since my last proper check in.

To start off, we had the Mount Fuji climb. I documented the entire adventure though tweets, audio recordings and videos on the various social channels, so I won’t go into detail here. But in brief: this went really well. The weather was perfect, being warm and with relatively clear skies. I picked up the brand-new 10-seater minivan early in the morning, luckily remembered how to drive (after a 2-year break), picked up the other 9 team members, and headed out on the two hour trip to the 5th station of the Yoshida Guchi trail. 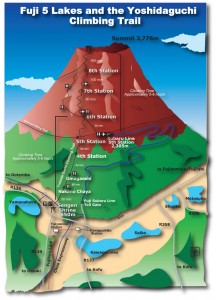 . It was around lunch time when we finally got our feet on the ground and started the long trek up.

Last year, we’d climbed at night time, and in appalling weather conditions, making for a pretty bad experience. This time, thanks to the fact that it was a day climb and that the weather was good, it was an entirely different story. It was an absolute breeze to reach the 8th station where we’d then spend the night – I could hardly believe it was the same mountain, it was that easy.

I used all of this technology to tweet, livestream (via Ustream), upload photos, audio and videos as we climbed. Of course, at the end of the day the quality of the output was to a certain extent limited by the speed of the data connection (and lets admit it, whilst it’s pretty reliable it’s not exactly fast up there!)

Reflecting on the livestream aspect of the adventure, I don’t see it as being all that successful. I made a poor decision to not broadcast constantly, and I also neglected to involve the audience to the extent that I should have done. It was very much a one-way thing, and lacked the ‘challenge’ aspect. Also, there was the time problem- we were to reach the summit at 3.30am! Still, to be honest, I don’t mind all that much. It was a learning experience.

I’m very grateful to have had the support of NTT DocCoMo and Cerevo.

Having slept for a few hours at the fantastic mountain hut we got up at about 2am, and made it to the top for the beautiful sunrise. The Japan Times published a story online and in print about ustream and my use of it on the morning of our descent. 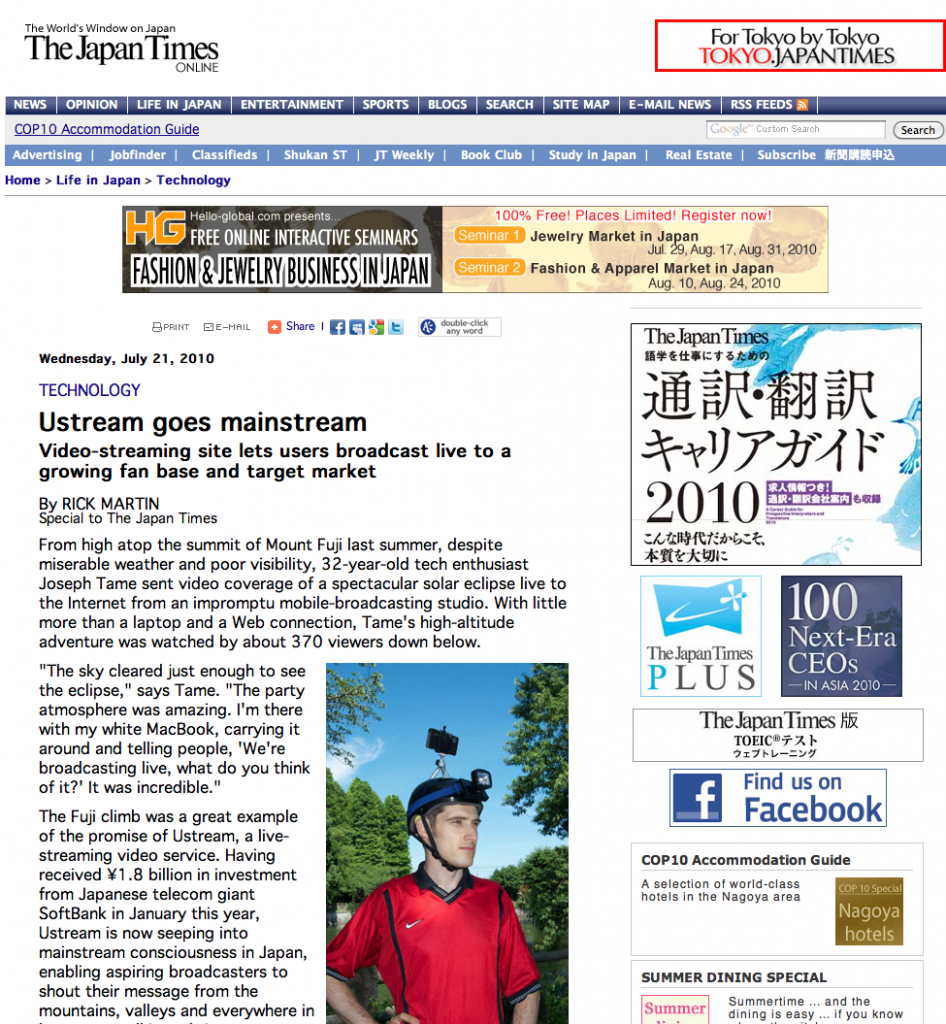 This climb of Mt. Fuji is something that I won’t forget – thinking about it now brings a smile to my face. The reason for this is not necessarily the beautiful view, the fun that I had with the technology, the good weather or the tasty curry at mountain station 8, it’s the people that I went with. It’s the interactions with them, the sharing of the challenge, the friendships that grew stronger through the experience – these are the things that ultimately matter.

It’s the same with the next mini-project I was a part of: the official Twitter Tweetup held on July 23rd.

With Twitter’s crazy success in Japan, the demand for tickets far exceeded the supply – only 400 would be able to attend. As with most things round here it was a case of knowing the right people. For me, that person was @mikamika59, an employee of Digital Garage, the company that runs Twitter here in Japan.

Mika (left) with my co-presenter montomos

I first got to know her following the Tokyo Marathon – she sent some very kind messages during the run. We subsequently met by chance on a bridge in Roppongi, and then went on to work together at TEDxTokyo – she was my co-host for the Ustream live stream.

Thus, when it came to the Tweetup she asked if fellow tech-otaku and good friend Steve would manage their official stream of the event. I happily accepted, and on the night worked with montomos as a presenter. Part of the deal was that I got to interview Twitter CEO Evan Williams. (thanks to @kirai for the photos)

Really enjoyed that – apart from the first 5 minutes in which I died on camera. I mean, it was really bad. I’m trying not to think about that. Luckily it wasn’t recorded, and only about 80 people were watching the stream at the time.

I managed to use the event as an opportunity to come out about my Twitter addiction: ABC News, Yahoo News, Fox 11

The following day it was off to @invisibleGaijin‘s to shoot a couple of short videos for a friend – his daughter wanted to enter a ukulele video competition.

Unfortunately on the way home from the shoot I twisted my ankle, and subsequently was unable to walk for a couple of days – this was a big shame as the following day was our 2nd Wedding Anniversary 🙁 Still, despite my being an invalid we had a nice time staying at a hotel in Asakusa – got a free upgrade to the best room in the hotel after I discovered and complained about a toothbrush in the bathroom that had already been used!

A week later I was on the 36th floor of a certain Japanese corporation, the name of which I cannot reveal here for reasons of rabbit security. There I was dressed in my bunny ears giving a presentation about the Tokyo marathon. It went down very well, despite my pretty bad Japanese and the fact that my keynote file completely disappeared off my computer an hour before I was due to give it. Bizarre.

All of the above has no real connection with my work, although I’m sure some of it will come to influence what I do in the future.

When it comes to work, things have panned out pretty well. I’m working freelance as a digital media producer / consultant. I have two clients at present, one a friend who has established an international education foundation (more on that in due course), and the other, my brother-in-law’s company, Total Football. Leigh (my wife’s sister’s husband), a professional football coach with 20 year’s experience, established the company in 2007 to run coaching sessions across Japan in collaboration with Nike Japan. We have ties with international level teams such as Manchester United – this coming weekend we’re running a couple of coaching sessions with coaches from FC Barcelona. Leigh himself is becoming known as the face of youth football in Japan for Nike. He’s currently in Holland having been invited by the Dutch FA to attend their elite training programme.

The company is now looking to take itself to the next level: *Twinkle*, with her experience over the past few years in many areas of business, is now in charge of everyday operations and expansion. I’m working with them to help develop a new marketing strategy. There’s huge potential here, and our job is to see that it’s realised.

The amount of work involved in both of these projects at present is such that I’m working pretty much 7 days a week. Still, the fact that I have the freedom to choose where and when I work is a huge bonus. I feel I have a degree of ownership with both projects, and this motivates me to push for big successes. I’m also learning a hell of a lot in the process of carrying them out.

Our affiliation with Nike is motivating me to think more seriously about sport – running in particular. I’ve been fortunate to be able to meet the head of marketing for Nike Running, and hearing how active he is in the sport himself (multiple marathons etc) inspires me to push myself to get back into it. I’m actually really missing running – my foot has not yet fully recovered from the accident I had just before our wedding anniversary. Last weekend I bought new running shoes, an armband for my iPhone, oh, and I finally figured out how to use the Nike+ app on the iPhone (the key is to buy the Nike+ widget thing to put in your shoe – the one I had before that I thought was broken was actually just a piece of filler-foam!)

This kind of leads into thoughts regarding my long term plans. Thoughts that are influenced by videos such as this one:

and people like Pete Gost (his site www.bigafricacycle.com seems to be down at the moment)

Well, it’s an idea to work on.

And make a reality.