In the second of my Akiba updates for Metropolis Magazine‘s Podcast, the Metpod I featured an extract from my interview with Patrick Galbraith (author of the Otaku Encyclopedia) that featured on Japan Podshow episode 6.

I also talked about the new iPhone 3G 3.0 software (when I wasn’t planning on upgrading to the 3GS!)

This event is sponsored by Japan Podshow – launching shortly!

If I’m not streaming, the previous live-streamed video will play.

(Go to http://www.qik.com/tamegoeswild to see a live-updated map of exactly where I am. There is also a comments tab – click on that and enter your comment – I will read them all out at the end – when I’m running my Phone will vibrate to tell me you have commented. 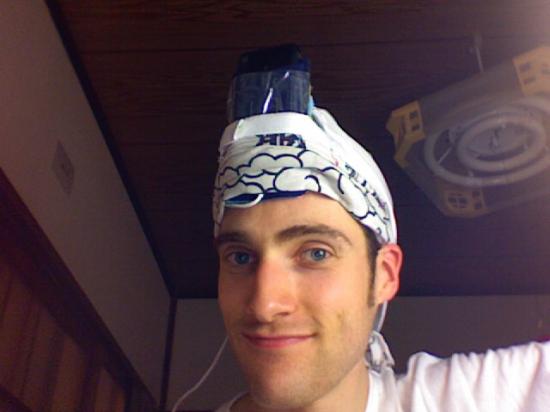 Final prep is done. I completely redesigned the iStreaming hat. It’s now rock solid, and doesn’t interfere with my vision at all. It is secured with a length of trouser elastic, multiple safety pins, a Japanese bandana, with a hat over the top). My thanks to Nami for coming up with the basic concept for this new device).

It’s angle will be maintained by an adapted stand that I got with an iPod voice recorder, and no less than three Sponges of Speed, all of which are actually made of paper for added forward momentum. The iPhone itself sits in an elasticated Belkin armband case that has been cannibalised.

I shall be using the iPhone’s built in mic, which what with the iPhone being in the Belkin case will be fairly well sheltered from the wind. I tested it tonight – it works pretty well.
The iPhone will remain connected to a powerful eneloop battery throughout by a cable running under my shirt to my pocket (thanks to Steve for the recommendation).

I will also have a Mophie Juice pack Just In Case.

I will start broadcasting on and off from 7am JST, 11pm BST, 10pm UTC. We should be moving onto the start of the course at around 8am JST – the starting gun will be fired at 09:10am JST. We aim to complete the race in 50 mins max.

What could go wrong?

What I am going to attempt to do is highly dangerous and should not be attempted at home. Any number of things could result in catastrophic disaster:

But these are necessary risks if we are to prevail. I face them with a brave heart and legs that are destined to run.

I’d like to thank everyone that has helped me in my effort. Special thanks to my friend and trainer Tom, my teacher Nami, and the army of Twitters / Tokyo friends who have supported me whilst seeing this for what it really is – a big bit of sillyness.

Thanks also to Kamasami Kong of the Tokyo Metpod for following the story, Bhasker at Qik.com for publicising it, and Steve at www.tuaw.com for ensuring that the story reached readers all over the world.