Wow. Second podcast out in 24 hours.

I really like this episode, even if I do say so myself. It’s the traditional Japanese music that does it for me, recorded live at the Kanda Matsuri, a huge street festival that takes place once every two years.

We hadn’t actually planned to record the podshow there, it just sort of occurred to us as we sought out conveyor-belt car-parks that it might be more interesting if we did do it ‘live’. The audio was all recorded on my iPhone – I thought it did pretty well.

It was such fun though. We were also lucky to get the two interviews with local people – the first one with the older lady was a real surprise – just goes to show you shouldn’t judge a persons’ English speaking ability by their face! The second interview was with a very amusing salarman on a bicycle, straight out of the 1970s. I loved the way he talked about traditional Japanese culture. I bet he reads Reischauer…!

I’m also delighted that the podcast has given me the excuse to talk to people like Brett (re. Edufire) and Ben (pachinko). Really enriches my life.

Editing these is getting easier as I get more used to the software, but it still takes an awful lot of time. On top of the audio, there’s the images, all the text and tags, various stages of conversion to normalise them and get the files down to an acceptable size. I’m not complaining – I love it, but I do just want to make a note of the fact that it completely takes over my life. 3 hours sleep last night – but  I just thought of it as practice for when we have children, and smiled. This is why we made the decision to just do a series of 12. Who knows what might happen next? I want to go full time with this sort of thing.

Anyway, I’ll just re-post the post from the Japan Podshow site below. If you do have any feedback on the show, we’d love to hear it, good or bad.

In episode 4 of Japan Podshow we take you to Akihabara, scene of the Kanda Matsuri (festival), a fantastic spectacle in which thousands of people crowd the streets carrying impossibly heavy mobile shrines.

Listen to the podcast now here or download it here.

We would love it if you subscribed in iTunes; Non-iTunes user? Here’s our standard RSS feed.

Join Joseph and George as they make their way up the street behind the Omikoshi (shrines), meeting people along the way who insist that we enjoy traditional Japanese Culture (and we did).

The podcast also features a very enthusiastic policeman with a whistle.

Tokyotopia – how to get into Tokyo from Narita International Airport

Honor Dargen is back! Having told us (in episode one) what happens when you arrive at the airport, Honor Dargen of Tokyotopia now tells us how to get into Tokyo.

For more information on the options honor mentions visit www.tokyotopia.com.

In this episode we also announce the winner of the Hiragana Times competition! The winner receives a 12-month subscription to the electronic version of the Hiragana Times, a fantastic bilingual magazine that brings you up to date news and views from Japan – with all articles having direct translations and furigana, it’s suitable for any level. You can also listen to some of the sections online – and there’s even native support for users of the learning platform Smart.fm.

This week’s competition – 5 lucky listeners can win vouchers to use for free 1-on-1 lessons on Edufire, the only learning tool with live video

Brett Fyfield, an Australian teaching Japanese on the Edufire platform, introduces this week’s competition, in which you can win free tickets for lessons in ALMOST ANYTHING! Want to learn Japanese? Spanish? PHP? Photoshop? Or perhaps you’re a teacher yourself – give Edufire a go. It’s incredibly easy to use and gives you access to a huge pool of students and teachers worldwide.

Listen to the podcast to hear how you can enter the competition.

Brett Fyfield (also known as Rainbowhill) can be found in the following places: on Edufire on Blogger and on Twitter

There’s listener feedback too! Thanks to News from the Other side; Kobe Kevin; supreme_nothing (Brian); Nick Ramsay; Tokyo Dan; Doug of Planet Japan; AnoBaka; Ongakuhenjin… and thanks to all our listeners for listening!

As always your feedback is welcomed.

You can alsosubscribe to us in iTunes here – this really helps us spread the word! For non-itunes users we have a standard RSS feed.

I’m delighted to announce that episode 3 of Japan Podshow is finally out – 36 hours late. A lot of it was recorded on a row boat on the pond in front of the Himonya Studio.

Whilst a hell of a lot of work, this was a really fun one to make, and I’m quite pleased with the end result considering how bad it was all looking at one point. I’ve had to cut a fair bit out – *Twinkle* had recorded a bit, and George and I talked a bit more twaddle. The Hiragana Times interview started out at 25 minutes and ended up as 2.

Make sure you stick around for the end where I’ve stuck in some out takes from the boat.

Please do send in your feedback, it would be much appreciated. If possible, please do so via the Japan Podshow site rather than here.

With little time to give over to blogging, I decided to do a video blog instead.

The video I start watching during this video is here

Japan Podshow can be found at http://www.pokya.jp/japanpodshow. 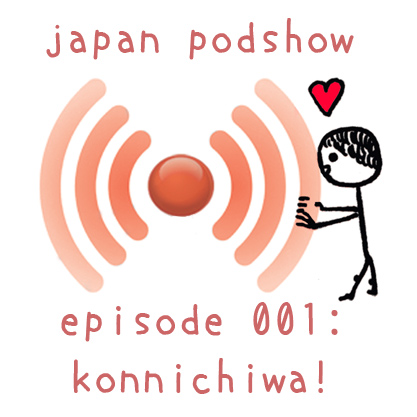 I’m happy to be able to say, we did it! [click here for proof]

I’ve been wanting to restart podcasting ever since I stopped about two years ago, but due to the amount of effort that has to be put in, it’s always been pushed back to the ‘I don’t have time’ burner.

It must have been a couple of months back that I decided that I did have time. I spent quite a few weeks just building the website, using the excuse that my co-host did not have time in order to not step outside of my comfort zone.

I must admit, I’ve been pretty surprised by the range and scale of the side benefits of producing the podcast.

Of course this is only the start – but not a bad start. There’s a lot of improvements that can be made in future episodes. As with everything in life it’s a learning process so the mistakes I made with this first one are welcome.

I’m thinking of perhaps breaking it up, and releasing mid-week specials, about 10 minutes in length, focusing on one story at a time.

I’m also hoping that the MacBook Pro, which should just be 3 days off now, will ease the tension I feel when editing – any work with video brings an instant beachball – very frustrating.

I also had an idea tonight that I’d like to start video blogging in Japanese. I’m upset with myself for not maintaining my Japanese blog, but not upset enough to make me want to restart it. But video-blogging would be a lot easier, and good practice too – both in terms of language, and in disregarding the importance of the good opinion of others.

I’m really happy here. One big reason is that I’m able to pursue my passions. Another is that I have a wife whom I dearly love and whom dearly loves me.