In a couple of weeks we’ll be asked to create a drama for our Japanese speaking class. The theme is Euthanasia.

I’ve not given euthanasia much thought before now. But over the past couple of weeks I’ve come across a few programs on Radio 4  that have touched on the subject, including this morning’s Saturday Live (listen again, interview is about 10 minutes in) which had an interview with the sister of John Close (see the 47 minute video about his life and death here).
Unfortunately I missed last week’s interview with Alison Davis, who had wanted to kill herself for over 10 years as a result of suffering from severe spina bifida, but was prevented from doing so by UK law. She subsequently came to value her life once again following a trip to India to meet two children that she had sponsored, and now campaigns against euthanasia.
It’s a really difficult subject, and I just don’t know how I feel about it.

The Family of East Asian Studies and the Opinion of Others

About a week ago, my case study “Making Students Matter: The Family of East Asian Studies” was published on a new section of the University web site. 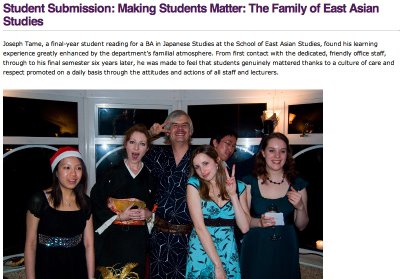 The Case Studies project aims to create a library of examples of good practice in teaching, highlighting success stories in order that academic staff across all departments can benefit and learn from one another. In such a large organisation several departments might be faced with the same challenge (such as, ‘how can we effectively teach statistics?”), with each department struggling on its own to find suitable solution. If one of those departments did then come up with some new whizzbanging wopaloobop technique, the chances are they would not be aware that other departments might also benefit from this, or, they may be hesitant to approach others and say “We’ve found the answer! You should do what we’re doing!”.

This is where the Case Studies project comes in. It seeks out examples of excellence, and actively promotes them to the wider community in order that all can benefit from the experience.

Whilst individual case studies may initially seem to be subject-specific, they often have the potential to contain valuable lessons for a wide variety of departments. As is the case, with the SEAS case!

In my study I basically discuss something that I think has played a major part in making my experience at the School of East Asian Studies such a good one. I quote:

Joseph Tame, a final-year student reading for a BA in Japanese Studies at the School of East Asian Studies, found his learning experience greatly enhanced by the department’s familial atmosphere. From first contact with the dedicated, friendly office staff, through to his final semester six years later, he was made to feel that students genuinely mattered thanks to a culture of care and respect promoted on a daily basis through the attitudes and actions of all staff and lecturers.

My article then goes on to describe in detail the little things that staff do to help promote this community atmosphere, which plays a big part in making my learning experience the fantastic thing it is.

On reading that article, one of my classmates emailed me: “You know, you could be accused of being a complete sycophant”. (I looked the word up in the dictionary (!) and found it to mean a yes-man, bootlicker, brown-noser, toady, lickspittle, flatterer, flunky, lackey, spaniel, doormat, stooge, cringer,suck, suck-up).

Well, yes, they are right. I could. In fact, some people already probably think of me as such. But I would say that if giving someone positive feedback for something amazing that they have done requires that one be labelled a sycophant, I would rather be labelled as such than not give that feedback.

I asked my friend, “Can you imagine what it would be like if we never received anything but negative feedback from our tutors when our homework was returned to us? Imagine how demoralising that would be!”

And yet, in a way, that’s exactly the situation that many staff are in. I don’t know about SEAS itself, but I do know from personal experience that in some departments there is so little positive feedback received by staff that even the slightest compliment regarding their efforts results in astonishing gushes of gratitude, with comments like “That really made my day!” “All we ever get usually is complaints!” “I just can’t stop smiling!” “I’ll pass it on to all staff in the department!”.

So whether it’s an individual, a department, or an entire organisation that has been striving to do something good for you, I feel its really important to express your gratitude. Gratitude is a motivating force, leading to a desire to continue to do well (or even better). Whilst criticism may reap short-term results, long term it can have devastating effects. I am sure that if our teachers had decided to just focus on when we got things wrong, there would be far fewer than 17 of us remaining on our course.

Finally, in response to the idea that I may be ridiculed or looked down upon in some way for highlighting the wonderful attitude of SEAS staff, I recalled the quote

…And in this case (as in many cases) what others think of me matters far less than the staff being recognised for their work.

…And in any case, if someone was to be so cynical as to believe me to be a sycophant (or lickspittle for that matter), I think I would be something of a fool to attach any importance to their opinion.
Righty ho, on with the show.